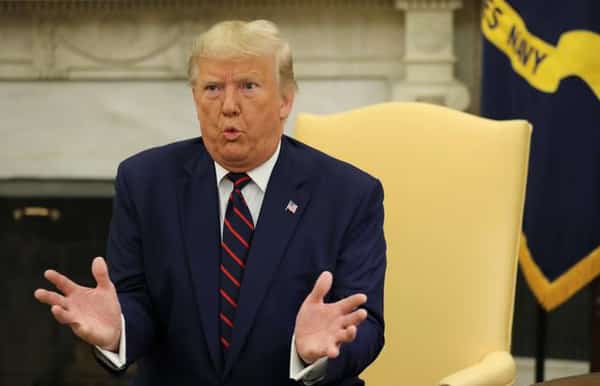 The President of the United States, Donald John Trump, is meeting most of his tweets with a somewhat sophisticated bitcoin scamming operation. Someone who fell for it says:

“I was browsing Twitter and saw a post that appeared to be Elon Musk tweeting about a ‘New Years Crypto Party Giveaway’.

I navigated to the website in the tweet and it appeared that Elon Musk was giving away crypto and all you had to do was send in some crypto to verify your wallet address and they would send back what you sent plus up to double what you sent in back.

In the moment everything looked legit to me and it seemed that there was a limited amount of time that this would last so I stupidly and frantically rushed to my CoinBase account and sent 0.4BTC or around $3000 USD.”

The above might look a bit simple, but first we have the president making a very serious point, and below it we have a reply by Darryl Silver who is also making a serious point (well, depending on your politics that is).

Darryl is most probably a real human – again just how real depends on your politics – but we have another Darryl.

It is easy to see there are two Darryls because one account is @silveraa, while the copy clone is @Dale followed by six numbers, those six numbers indicating this is a new account probably auto generated.

Dale is most certainly a bot, and this one does not depend on your politics at all. On a quick glance, however, Dale looks very much like Darryl and that he looks like Darryl is very important.

Important because people might know Darryl, maybe they even like him, maybe they trust him fully. So at a quick glance it is Darryl, not Dale, who is vouching for what is a scam.

The way he does it is important too because before these scammers reached Trump, they infested Elon Musk’s twitter replies.

At the time they used to write things like send 1 eth, will send back 2 eth. The dogecoin co-founder however came up with a way to identify these scammy tweets, embarrassing Twitter to the point they finally bothered to take action and cleaned it all up in 2018.

Now however they haven’t caught this Dale and it’s not just a Dale, there’s Jeffs and all sorts – all similar style of bot copy cloning a real account – with it important to also notice above the Everyday Astronout and Niche Gamer which are fake testimonials pretending this scam works.

Twitter hasn’t caught these scamming bots because now they put only the “endorsement” in text, the rest is an image.

This particular difference is extremely important because you can easily create a bot that does the above and posts an image, but to create a bot or rule that fights these scammer bots is extremely difficult because you’d need to give the bot the ability to read images which can potentially be done, but is very difficult without some human involvement.

Interestingly these scammers do not want small sums of just $100 worth of bitcoin, 0.01 BTC. Instead go big or go home seems to be their approach.

The address apparently also changes. In the one above, there’s just “only” 0.5 bitcoin, but there’s suggestions some addresses have received in total 10 bitcoin or more.

Anyone who has been scammed should report it to the police, but they’re probably not quite equipped so it is perhaps best to get some spreadsheet going where people can share the addresses because that would be a good way of increasing the chances of catching these scammers.

More importantly perhaps, to avoid being scammed just remember the golden rule: if it is too good to be true, it probably is a scam.

In addition, there’s a lot Twitter can do here. The above scammy tweets, for example, are still there. That’s probably because this is all still new and you can’t easily automate the removal process, but it’s probable someone from twitter has come across these tweets and yet they’re still there.

This social network needs to invest in human capital to scale the removal of these clear cut scammy tweets, tweets which maybe even Trump has seen.

As an aside, easy joke here about maybe Trump sending some himself – and the joke would be sad funny not because of politics, but because he is old and probably not very familiar with this bitcoin stuff.

Yet, it is the future as we now have bots fighting bots over digital money that is QR code sent to whoever anywhere in the world and all of this at the digital door step of the United States President. Does it feel like 2020 yet?