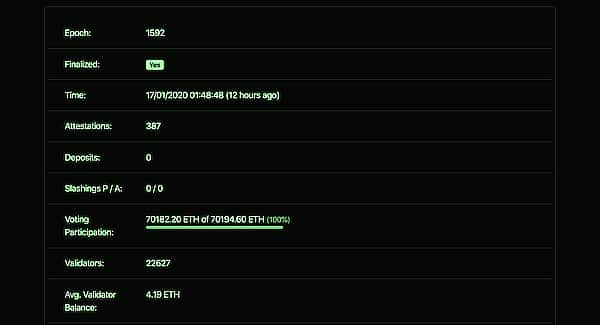 Ethereum 2.0 single client testnets have been running for weeks with restarts and the like, but now they seem to have reached a more stable stage.

One of them is that of Prysmatic Labs which went out on January 9th with Raul Jordan, a dev for this client, calling it the largest eth 2.0 testnet.

There are a number of other client testnets out, but this one is shouting the most for now and for good reason.

“These are 22k validating keys. It’s probably between 5 to 10 individual operators. Maybe more, but it’s hard to tell who controls keys and who’s just an observer.”

In total there are 70 nodes he said, which is quite an achievement for a 4 days old testing network and clearly shows just how much interest there is in one of the biggest milestone in the blockchain space: the launch of the genesis 2.0.

There’s considerable interest because there is quite a bit of competition, money is involved and there are quite a few opportunities too.

Staking service providers, for example, will want to go out first and best. Self-staking individuals, likewise. Whether to stake or not can be a question answered by these testings. And maybe it’s a bit too early now to be bragging about hacking eth 2.0, but that would be quite a brag though.

“Hackers, break our testnet!” – Loon said in November when the older testnet was running. Some changes had to be made, so there’s a new one now and it is moving.

With some magnifying glass maybe you can see much of the above, but these are number crunching estimates by Vitalik Buterin, ethereum’s co-founder.

Our out of nothing estimate would probably be around 10 million eth once the network is running decently with circa 6% interest gained by stakers while overall inflation is increased by just circa 0.2%.

The more stake, the less each receive, so there are many moving parts with the testnet being a good place to see just what moves and how.

That’s particularly important in regards to penalties and the like, with the estimated circa six months live launch now hardly being much time to see what glitch might cause problems as the software keeps on staking.

Meaning it’s not surprising there’s quite a bit of interest in the testnet even as a single client environment, with it a good idea to test different clients both to see which one you like and also to minimize penalty chances as the protocol incentivizes the use of different clients and set-ups due to how penalties are laid out in that the more stakers go offline – say because they’re all using a very popular client – the more they get punished if accidental or intentional misbehavior.

So, busy 2020 has began and what better way to keep busy than with geeky code, numbers, dividends, setups, internet funny money and of course if you haxors, then if you can hack boneless blockchain clients.