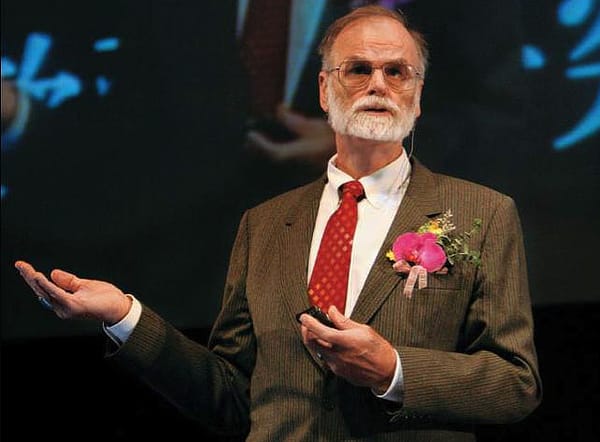 Jim Gray, “a computing legend since the 1970s. His work helped make possible such mainstays of modern life as cash machines, ecommerce, online ticketing, and deep databases like Google.”

“His best-known achievements include… the Five-minute rule for allocating storage.” “The five-minute rule is a rule of thumb for deciding whether a data item should be kept in memory, or stored on disk and read back into memory when required.”

“He defined the transaction as a unit of work, such as moving money from one bank account to another, that must leave the bank’s database in a consistent state whether or not the transaction succeeds: either the money moves, or it stays in the original account… He proved the correctness of the approach.”

He received the Turing Award in 1998 “for seminal contributions to database and transaction processing research and technical leadership in system implementation.”

In 1971 Gray “met John Cocke, who suggested the challenge of scalable computing: finding a way to interconnect computers so that spending twice as much for computer hardware would allow a large computing problem to be solved twice as fast.”

He worked at Bell Labs too. “Researchers working at Bell Labs are credited with the development of radio astronomy, the transistor, the laser, the photovoltaic cell, the charge-coupled device (CCD), information theory, the Unix operating system, and the programming languages C, C++.”

“His primary research interests were large databases and transaction processing systems. He had a long-standing interest in scalable computing, building super-servers and work group systems from commodity software and hardware,” says Microsoft where he also worked.

Until suddenly in 2007 he disappeared under peculiar circumstances after sailing on his boat Tenacious off the coast of San Francisco.

“Gray and his boat vanished. The Coast Guard received no Mayday call, and Gray’s EPIRB — an emergency radio beacon designed to broadcast a homing signal if it sinks — stayed silent.

No sailors in the area reported seeing the boat adrift, and not a single life vest, flashlight, or scrap of debris belonging to Tenacious washed up on local beaches,” said Wired back in 2007.

It so happens what little is known of Nakamoto includes the fact he claimed he began working on bitcoin in 2007.

The idea struck him, and he couldn’t stop thinking about it, spending around two years on bitcoin development.

Gray’s background fits the expertise of bitcoin’s inventor due to his deep knowledge of databases, with the blockchain often somewhat dismissively called just a database.

The bitcoin whitepaper specifically mentions the Two Generals Problem. Someone like Gray who coined it all the way back decades ago, could be the one that solved it.

Yet that raises the proposition that there wasn’t a tragedy in January 2007, but an intentional disappearance. An ambiguous loss his family has had to deal with because a massive search led to no trace whatever of anything.

“He and his group are working in the areas of astronomy, geography, hydrology, oceanography, biology, and health care,” the Microsoft eScience Group said back when.

His work familiarized him with many of these areas, so this towering tech figure probably could have disappeared if he wanted to.

But if we hypothesize he may have done so to become Satoshi Nakamoto, the obvious question would be why would he take such drastic measure?

Unless it wasn’t voluntary. Unless he was disappeared perhaps with the aim of inventing bitcoin, but that sounds too fantastic.

Yet, the disappearance of a Turing award winner in America without any trace whatever does also sound fantastic. How can he just vanish?

That’s an unknown, but what is known is that whether Gray was or was not Nakamoto, without his contributions to the field of tech science, there would probably be no bitcoin.

He was fundamental in the establishment of online transaction processing, with his work on databases a building block towards the crypto digital revolution.