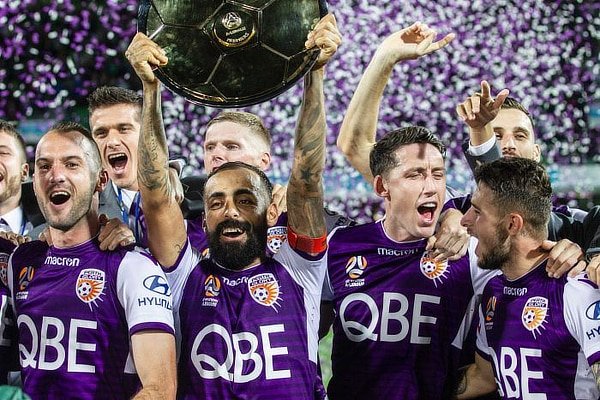 Football has become the latest industry to greet new finance as a recent announcement turns heads across the world of sport.

“I’ve made no secret for the last 18 months I’ve been looking for a partner. I can’t compete with the oil sheikhs in Abu Dhabi (City Football Group, which own Melbourne FC), or the Russian oligarch in Sydney (David Traktovenko, owner of Sydney FC) or the Indonesian billionaires in Brisbane (Indonesia-based Bakrie group, owners of Brisbane Roar). I’ve looked for a partner,” said Tony Sage, the current Perth Glory owner.

The partner in this case is Jim Aylward, an unknown figure who from his Linkedin appears to be a marketer.

He led what they call an Initial Token Offering, better known as an ICO, in 2018. Raising $71 million for the London Football Exchange Cash token (LFEC).

According to the blockchain, there are about 4 billion tokens in total. They claim a company which Google doesn’t know, Fortune Star Digital Asset Fund (a professional Cayman Islands investment fund), has acquired 3,547,437,988 LFE Cash tokens which are locked for three years.

Adam Little, whose background seems to be in business consulting and now works for LFE, says 400 million LFE tokens are trading.

They are trading on Bithumb, the South Korean exchange, with its value fluctuating widely from about 20 cent, or a circulating market cap of $70 million, to now 10 cent at the time of writing.

How much was offered for this club is not clear but speculation is a bit more than $15 million with the deal not yet finalized.

“I cannot believe the rhetoric that has been caused by me advising the players and staff only about a potential deal,” Sage said after the announcement, adding:

“Any new concept that people don’t get, we are all sceptical about, myself included, hence my trip to London for 3 days to check them out.

Remember Mark Zuckerberg was also laughed at and ridiculed when Facebook started. The whole blockchain crypto world was supposed to be dead 6 years ago, but it thrives. I don’t get it myself, but it does seem to work.

LFE ‘s concept is brilliant but will it work? I don’t know and that’s why I am spending 3 days with their team in London with independent experts.”

The plan is to tokenize shares of clubs and build an exchange where they are traded against LFEC and also things like LFE pay where you get discounts due to the fact the clubs won’t have operator costs.

So we are told, with other plans there whereby you accumulate points if you pay with LFEC, in addition to other aspects that try and create a closer community through the token.

This tokenization of clubs however is obviously the most exciting aspect. Manchester United for example currently trades at nearly $19 per share based on numerous income sources, including broadcasting rights that amount to some £240 million with total revenue of circa £600 million.

The concept of going public is a well established one, so there is no innovation in that regard.

Where the tech is concerned that too is well established. The token is basically a share, but digital like bitcoin. Instead of dividends, where shareholders get a bit of the profits, here you destroy some of the tokens, so reducing supply.

Supply and demand says if supply reduces while demand remains the same then the price increases, thus we get the dividend distribution.

So there is no innovation here except that this digitization of ownership is being brought to football clubs. The difference being that the token can move far more quickly, can move globally so it has a far bigger market than a share which is usually limited to one exchange, is far more accessible than a share, and because you don’t have gatekeeping intermediaries the whole process is far cheaper.

Meaning it can be a very exciting thing for a globally little known football club which is now being introduced to everyone.

Yet as with any new thing there necessarily would be debate with this being very new for regulators too.

The Australian government has been very friendly towards this space. LFE is based in London and they too have been friendly.

Yet it is a leap of sorts for the club, the regulators, and if it does go through then it would be a leap for this space too.

A leap into a new era, and not necessarily an unknown one because conceptually all this has been established and as stated the only difference is the share is like bitcoin instead of a paper one in stuffy banks.

But any investor would be concerned about just 10% of the supply being in circulation. Yet it isn’t clear whether that would have anything to do with the club’s token, or whether the idea is for LFE to become the token share.

Nor is it clear whether the team can pull this off. It appears they’re outsourcing the tech aspects, with Aylward perhaps being just a marketing guy with an idea and a lot of money who is now going out there to put the right people in the right place.

Not least because as stated there isn’t any innovation here. It’s just putting things together that have already been invented, and proven, and now so applying them to the world of sport.

There, it would be a first, and with any first, heads necessarily turn as now it becomes just a matter of time until all that can be tokenized is tokenized.