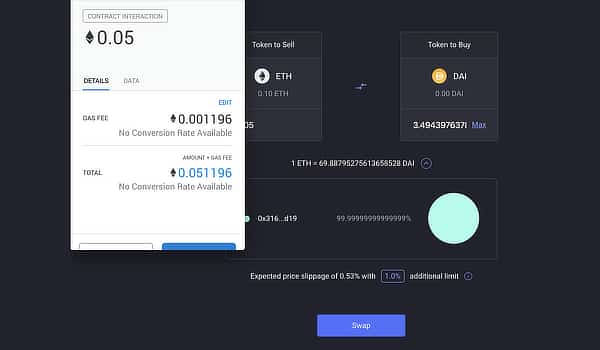 There has to be an order book right? There’s an order book somewhere with the bids and asks and so we can go after the guy that manages this order book.

So said SEC’s chair Jay Clayton back in 2018 with the above a paraphrase of the bankers’ lawyer who would be very surprised to learn there is actually no order book.

Not at Uniswap, the smart contract based exchange broker. At Uniswap instead there’s only maths.

Kind of complex maths, but a bit intuitive with the exchange of assets happening based on an algorithm they call the Constant Product Market Maker Model.

Automated Market Makers (AMM) is the more general term and basically they set the price based not on bids and asks but based on say the amount of eth and dai that has been put forward on a liquidity pool.

A liquidity pool is just the depositing of some asset in a smart contract in this case. The depositors so being called market makers.

“Let’s also assume the Coinbase price of ETH is $100. If x/y didn’t equal 100, there would be an arbitrage opportunity between Uniswap and Coinbase,” says Cyrus Younessi, head of risk at the Maker Foundation.

Hence the saying you’re trading against code, but conceptually this is more a derivative or a decentralized peg of eth’s price which is actually set on physical exchanges as presumably without that arbitrage opportunity this whole thing wouldn’t easily work, or at least not without considerable volatility even by crypto standards.

On top of this a new dapp that hopes to launch next month, Balancer, is building what might seem like an incremental improvement but appears to be an innovation of sorts in bringing to this space bot run index funds.

Mike McDonald of Balancer Labs, who describes himself as a Security Engineer and the creator of Maker Tools, says Balancer serves two purposes:

“A liquidity provider and a portfolio rebalancer. So if you’re familiar with something like Uniswap, Balancer generalizes the constant product formula so instead of having two assets 50/50 weighted, you can have n number of assets with any weights.

On the portfolio rebalancing side it’s easier to compare to traditional finance. In Indexes and ETFs, you usually pay someone to rebalance the portfolio, however in the case of the AMM in Balancer, traders pay you to keep the portfolio balanced through trading fees.”

If you understood none of it, then you’re in good company because we didn’t either.

Starting with the “weights,” in the DAI/ETH example you basically divide the number of dai by eth and you get the price. Here we can have dai, eth, wbtc, mkr, rep, snx, bat, usdc, ant, and zrx.

That’s according to the current Kovan testnet dapp which we were given a preview with the experience characteristically slick.

“There is a separate interface to add liquidity, that’s under development and we should have a beta within 2-3 weeks ready to show,” McDonald said with liquidity providers earning fees “any time traders or arbitraugers trade against your liquidity.”

In traditional finance you just hand over your money to a bank or asset manager who charges you for the privilege of him or her doing with your money what they please. Including lending the stock to short sellers.

Here, the equivalent of the stock manager has to pay you to use your asset while performing the service of re-adjusting your portfolio as asset prices move.

Nuts right, but it makes sense when you think it’s not a real human at the other end, it’s a bot. So it isn’t skill here that is valuable, nor labor nor time, but the asset and the right to use it.

“In the case of Unsiwap, it’s two assets that are constantly being rebalanced to 50/50 weights,” McDonald says. “For balancer you can have any number of assets. So for example if I want a portfolio of 50% ETH, 25% DAI, 25% MKR I can just set it and forget about it. And then arbitraugers will always keep the portfolio balanced.”

So weight here is getting say $300 DAI to equal one eth. Balancing is the moving in or out of dai or eth to get it to say $300 DAI is one eth.

Here we add other assets, and we get money from bots for the service of moving our assets around in line with price or liquidity movements or indeed our own preference.

They have smart pools. “Essentially a pool that is controlled by a smart contract that allows any arbitrary logic,” says McDonald while the docs say:

In addition they have plans to bring flashloans, “not in the current version, but future versions will allow flash lending of the entire liquidity pool,” says McDonald.

Making this a combination of many things. An exchange broker, an asset manager of sorts, a lending and borrowing facility, and an arbitrage bonanza.

So getting back to Mr Clayton, he can keep his ETF. We’ll make our own with smart contracts and open source bots and of course with eth.