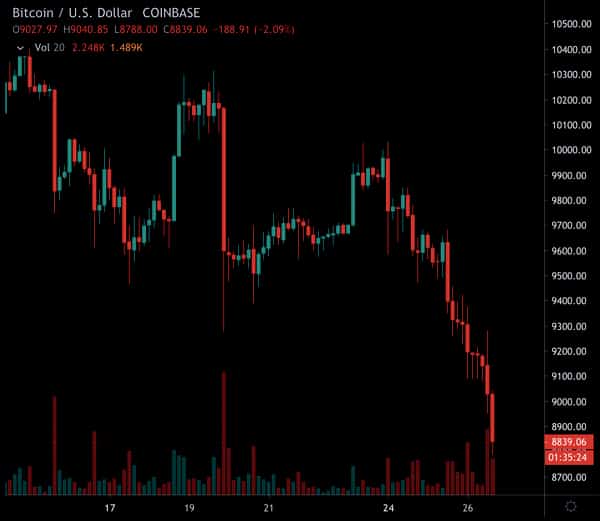 Bitcoin is down by about 12% (pictured above) in what might seem like a puzzling move especially as it has been responding to macro events in the past two months like a safe haven asset.

Thus when concerns rose over the economy regarding the spread of a new strand of flu, you would have thought bitcoin would rise just like gold did.

Bitcoin has fallen, however, showing once again it is an uncorrelated asset because it’s unique due to its digital and truly global nature.

So trying to guess what bitcoin might do requires a fully global perspective, regardless of whether it concerns enemy nations/groups – like even North Korea – or best buddies, because bitcoin is open and permissionless.

Thus while getting gold might be a hassle, and getting national stocks might be a mission, going into buying and selling bitcoin is relatively easy.

So you have some “kid” say in South Africa putting some site up and now the entire South African market can buy and sell and so can join the crypto economy and can have a say on bitcoin’s price.

This matters because while most trade on regulated exchanges which handle most of the volume, the open nature of bitcoin allows for quicker feedback on events as realistically you simply can’t control its buying and selling that includes just mining it.

The above prelude is to explain why we think CNY might have something to do with this recent bitcoin price action.

We can see there its value falls and falls against the dollar, but interestingly we have this huge lower opening recently suggesting something has changed.

What has changed of course is the fact that the flu is now drifting off in China and the Communist Party there is lowering the fear temperature a bit, telling people to get off to work now in a presumably somewhat slow process towards normality.

Bitcoin of course reacts far more punkly because its a far smaller market compared to forex trading where trillions are exchanged daily.

Thus bitcoin is perhaps trying to price in a potential increase in Yuan’s value, which might mean a decrease in bitcoin’s value depending on what the other herds do.

The relationship between bitcoin and CNY is often forgotten with people currently puzzled why bitcoin no up if this flu in some parts of Europe, including Bloomberg which of course did not miss the opportunity to declare the safe haven narrative dead.

We think they’re mistaken, as usual when it comes to this space, and think to the contrary actually this is cementing even more the safe haven narrative and is maybe evidence of something else that might have developed, albeit at a small scale.

On the safe haven part, it is probable bitcoin knows something other markets don’t. What that is exactly isn’t clear but our guess is that this flu has either been overplayed or maybe they’ve learned it’s acting like normal flu with it going up during high cold season and then drifting off.

That would be good news if it turns out to be so because otherwise this wouldn’t have been an over-reaction as we didn’t know just what this thing was/is, how it might develop, and whether it would drift off or otherwise.

That would be good news in general, but maybe not for a safe haven asset. Yet boxing bitcoin in just one category is far too simplistic because it is of course also a speculative asset in as far as maybe it will be the money of the future, and more importantly where this article is concerned it is also a means of exchange, a unit of account, and a store of value, that being it is actually money and a currency.

Thus we are starting to suspect there might have developed a reasonable level of international commerce with bitcoin especially to and from China.

The reason is probably because China has strict capital controls and no one wants to deal with bureaucracy so instead of going through getting approvals to send or receive x amounts, you just give a discount in bitcoin.

The Communist Party there has ostensibly banned crypto exchanges, but we think it is probably more correct to think they aren’t really enforcing it except now and then and even then probably half-heartedly.

That’s because if we are correct this bitcoin move is due to CNY, which is probable as there isn’t another good explanation, then bitcoin trading in China is clearly flourishing.

Many miners are there of course, and bitcoin isn’t widely accepted so the fact they are able to continue operating suggests bitcoin is maybe limited when it comes to moms and dads, but not go getters or businesses.

Hence this reaction might not be just speculation or front-running, it may instead be the “real” market or the “real” economy where the value of bitcoin received and sent from or to China affects and/or is affected by forex markets because it is exchanged for national fiat.

That might suggest bitcoin is maybe undervalued, something you’d think we’d say but if international commercial pipelines have developed based on bitcoin then that is quite something.