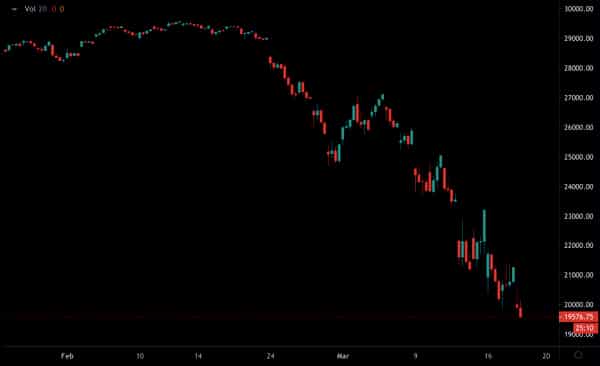 The shock slashing of interest rates to 0% you’d think would have sent the market roaring.

More than a trillion in liquidity globally, tax cuts, super cheap oil prices, you’d think there has never been a better business environment.

Alas, doing business now is illegal for the vast majority of sectors as France becomes the latest to institute ‘no neighbor talk laws.’

“Tens of thousands of police will be patrolling streets and issuing fines for people without a written declaration justifying their reasons for being out,” according to the latest announcement from France.

They can still go to work in France if it is ‘essential work’ and they can’t do it from home. In Italy, the lockdown has become almost total with people now unable to even go to work in general.

In America even sunny Florida is apparently lockdowning. New York, Los Angeles, but they can still fly domestically.

While in Europe the bearer of the flag, Germany, was the first to kneel and close borders.

This sudden plunge in activity and production, and across the world and at the same time, will probably lead to a Great Depression with our estimate of a 10% fall in GDP likely being too optimistic.

Optimistic because that assumes 50% reduction of economic activity for two months, while it appears for one month it is probably 80%.

In addition, health advisors are now saying this isn’t a two weeks or two months thing, there may have to be an on and off of these restrictions, like some sort of tap.

So this might be worse than even the 1930s when the then Great Depression led to a 15% fall in GDP.

Not least because dealing with the financial crisis was somewhat easy, you just pump money into banks.

Now you can pump money all you want, but people can’t do much with it as they’re not allowed to go out and spend it.

Maybe such money pumping therefore should be after corona clears, or at least after the restrictions ease, while the focus now maybe should be more on fully cancelling what generally can be called rent-seeking demands.

Rent and mortgage payments is an easy one. Bills, including phone and broadband bills. Loan payments, card payments, tax payments, business expenses, and basically putting everything on hold since people are being ordered to stay at home.

Yet that probably wouldn’t do much either to prevent an economic downturn, but it could make it more bearable.

Where stocks are concerned they’ve fallen about 35% so far. During the Spanish flu they fell 50%. So this time with the Chinese flu they might have another 15% to go, perhaps more as the current measures are unprecedented.

That Spanish flu however gave way to the roaring 20s, so at the other side of this we might maybe have fun for once, but for now both fed and gov seem to be out of ammo where the economy is concerned.