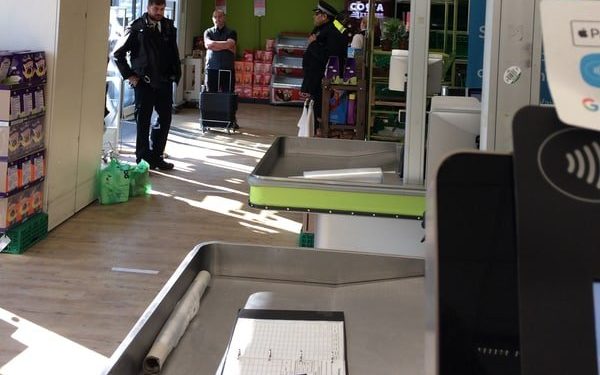 It is as if pretty much overnight London has become a different land in some parts amid an ongoing curfew by Boris Johnson, the Prime Minister.

It is a tale of two cities however, in a way. The neighborhood streets are somewhat normal. Quieter than usual, especially considering the beautiful spring sunshine, but there are people running, old people walking, it still feels London here.

Once you get to the high street however, you may as well be in a different planet as the mask wearing becomes somewhat common, and the busses are no longer fully empty, but contain some people with even scarier masks.

An old lady, not pictured, wonders if she is doing ‘this’ right, the standing not quite in the queue but by the rails while wearing a facemas and while keeping the distance.

You can go ahead grandma, you can even go in, go at the top of the queue. She is indeed let in.

We got bored of waiting in the queue, however, so tried the other shop, Coop, where to our surprise the shelves were empty.

But they said don’t panic buy because there is plenty for everyone!? Did they lie?

Or is it more they just not replenishing the shelves so that people don’t go to the supermarket at all?

Who knows, except maybe the police you’d think which somehow is immune to all this and can hang out all day.

Although not all shelves are empty. There’s plenty of the stuff you don’t want.

They don’t have the fruits you like, but still the nice tomatoes are around, well some of them, not the cherry ones. Just tomatoes though, no courgette, no mushrooms, no nuffin.

The fine pies with butternutsquash have been taken, but trashy pizzas are still there.

There is fish, the frozen sort, but no succulent salmon – or not nice ones anyway. No tortellini, but thankfully there were some lambchops and some not nice, but edible burgers.

The police was minding its business as far as we could see. There are reports from Spain they throwing people against the wall and generally being authoritarian, but our lads didn’t interact.

They of course have the right to arrest people now for just being outside, or to fine them, but we didn’t see any of that.

Maybe because its still the early days of curfew. In Italy and Spain they gotten more and more draconian by the day.

Here, who knows what to expect in the weeks to come. Treatment of patients hopefully so that we can get back to normal, but it’s very strange all this.

It’s very strange how the same story seems to be repeated everywhere, all nice and packaged with the balcony signings, or here some clapping last night although most did not join in because they probably considering it propaganda.

There hasn’t yet been an article on some man who fainted on the streets of London. Maybe because here people have complied generally, so no reason for that sort of propaganda.

Brits of course don’t want to give Boris an excuse to enjoy his new role as dictator in chief, so they staying home, or are getting healthy by going for a run.

Yet it is not clear how long people are able to bear this, especially the lack of good food and in nice neighbourhoods. God knows what’s going on in the modern ghetos.

What is known however is that many companies have closed, fully. Some that came here for work have gone home because there is no work anymore, and not just temporarily. Some businesses have fully shut, for good.

It’s a drastic decision this that has been taken, and a decision that comes at a very, very high price. Both literally in that taxes presumably will skyrocket to pay for this huge debt that the government is taking. And you’d think politically as we all see the police standing guard in our own shops.

It’s a curfew. That probably has not sunk in for many yet, but the usual democratic system is being bypassed with these measures by decree, like the old kings.

They want us to go through three weeks of this, even as scientists have now began arguing with each other over the ‘advice’ and some of the doom ‘projections.’

The politicians however are not arguing, they not even debating. Just like before the Iraq War they all in agreement, which by itself tells you penty.

Independents probably think China is clearly flexing its muscles as in just days it exports its authoritarian system based on the fear of some ‘invisible’ enemy that China managed to get rid of pretty quickly and by quarantining some second or third rate cities, not Shanghai or Beijing.

So it’s strange, and initially they said there might be two years of this. Backlash is growing however as people increasingly criticize some bureaucratic ‘experts’ who probably are loving all this new found power they’ve suddenly grabbed to the point they ordering Prime Ministers and Chancellors around.

What is even more strange is the fact the opposition in pretty much all countries is most vocal in demanding stricter and stricter measures, even martial law.

The opposition of course is meant to oppose and criticize, but just like in one party China, here too there’s now basically one party.

Sad, very sad considering evidence keeps growing the fatality rate is way below 1%, probably 0.1% and even then for the at risk groups.

Just as evidence keeps growing for those at risk group there is treatment which is being denied to them.

Not that the elderly seem to care very much. They apparently are the biggest breachers of these curfews, presumably to comfort their sons and daughters who are being called all sorts of things even as they’re imprisoned in house arrest.

There were very, very few young people out there. Almost none really, maybe a handful. Most were mums with their small children, or grandmas and pas.

Guess dictators can’t accuse them of ‘killing’ people, while for the young they spare no words, including some politicians ranting like Hitler about using flamethrowers against young people.

And some are loving all this. Third grade celebs now get a bit of attention by coming out with corona. Politicians being seen to be tough is very fashionable in their mind. Some politicians even got this apparently. Everyone got this, even the guy in charge of policy, yet they basing their policy on the tiny, tiny fraction of the confirmed cases.

Something that may turn out to have been a huge mistake, and a mistake that these young people they hate so much will have to pay for in the years and maybe even decades to come as government debt is set to skyrocket.

A power grab of epic proportions, under an excuse no one really believes is so serious, as all now worry whether democracy and liberty can stand and can flourish while confronted with the rise of authoritarian China.