New York Has Flattened the Curve Says Study, is This Nearly Over? 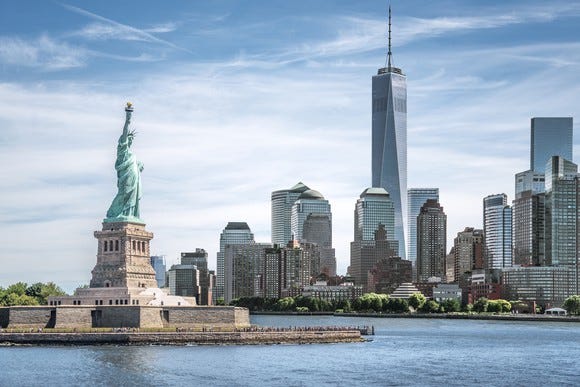 New York has managed to flatten the curve according to a new study by the Massachusetts Institute of Technology (MIT).

“There already appears to be sufficient evidence to conclude that the curve in New York City is indeed flattening,” the study says.

The main evidence used is pictured above, showing projections and actual data, with the study stating:

“The number of reported new infections on March 30 was 4,603. If the path of the epidemic had continued at the pace predicted from the fitted line, new daily infections would by now exceed 100 thousand.”

In short they’re concluding the curfews have worked, with new cases now seemingly flattening for New York, and may soon start falling in percentage increase.

In Italy that has already happened with the number of new cases still increasing, but decreasing percentage wise. Suggesting they’re coming out of the peak.

London right now is pretty much at the peak. The official line is the peak will be in two weeks, but officially reported data is lagging by two weeks.

Cases in UK are still rising because the data is behind, but a far better indicator of peaks and when we might come out is the weather:

The weather in London has been at that perfect 8 degrees, but next week it should become a bit more springy.

As we can see it continues to be somewhat cold according to these projections, but not at the temperature that this thing likes.

The above weather data is pretty much identical to Wuhan in January and February. Or indeed Milan in February and March.

London and New York are apparently having pretty much the same weather temperature wise, with maybe a few days difference, but we’re basically at the peak.

That means right now it is hugely important to stay indoors for any and all reasons except the grocery store as it is at this temperature this spreads best.

Starting next week then London and New York should be out of the peak, but data is lagging for obvious reasons as they have to do tests and certifications, so officially next week we’d be at the acceleration stage when in reality it is probably the opposite.

Evidence that the weather is a far better indicator of the trajectory of this comes from Italy itself where they have reported 4,053 new cases.

Curfews were imposed in Italy one months ago, so that two weeks period has gone, but cases are still rising.

The reason for that is probably because hospitals are a great environment for this to spread.

Plus, half do not get symptoms at all and it is sparing young people, with young in general being anyone under 60 to 70.

Yet there could be a very serious pandemic, and in that case you’d expect measures to ensure it doesn’t spread within hospitals by perhaps having specific hospitals or newly build/refurbished care centers so that it is contained.

Here it appears there has been no effort at all to ensure that it doesn’t spread in hospitals as right now pretty much anyone who is in hospital probably got this.

That could explain why so many seem to have as much as three serious illnesses, which very deceptively is blamed on this new thing.

In addition doctors seem to keep getting this, which is good in a way because they become immune if there is a second wave or anything, but unfortunately a very small number of them have departed.

These doctors and nurses obviously have homes, and some of them might take public transport, and they have to shop, so despite the lockdown cases have increased still in Italy, although the percentage is falling, but there is also the lagging factor as by now you’d think all these essential workers have probably got it.

Boris of course did. Putin and Merkle did after visiting some doctor. Xi allegedly did as he went off from public view for two weeks. Trump says no, but he keeps having conferences and so on, although at that age maybe he didn’t catch it.

There is treatment, and proven treatment, plasma. This is where the amount of anti-bodies is strengthened by adding more from those that already had it.

It’s not very clear how much that applies because as all these politicians and celebs and media people got it, you should think there would be plenty of these anti-bodies to go around.

So Trump would get good treatment but as stated this is a very, very benign version, with the worry being what might happen in autumn or winter.

This wave should be starting to be near its end right now, with it probably over in Italy but they’ve extended the curfew for another two weeks because dum government with the worry in some parts there now being food itself.

The already indebted Italy, which was barely growing due to being suffocated in red tape with world rankings categorizing it as unfree where commerce is concerned, will now be very indebted.

They like to change their Prime Ministers by the day. Like who is Renzi? The previous PM. And the one before him? Who knows.

Merkle has been running Germany for 15 years, while in Italy as soon as one Prime Minister learns the job, a new one comes in, meaning nothing gets done and so financially the government is not in a good position at all to handle this.

The cuts in UK means it can better manage, while US has petro dollar so they can borrow or outright print a trillion coin.

An American oil producer however has gone bankrupt, so the economic hangover might hurt a lot more than those 80 year olds with three illnesses.

But both US and UK are now probably at the peak and as you know this has two stages. At first a cold basically, and then after around 5 days a second stage kicks in that deteriorates the situation considerably within 24 hours.

So the peak of hospital admissions should be next week for London and New York, while new cases outside of hospitals should be dropping and quite rapidly next week.

The week after that this should be over where new cases outside of hospitals are concerned, while where hospital admissions are concerned they would start rapidly dropping, rather than being over.

Where fatalities are concerned they irrelevant in regards to over or not over. Obviously they’re very important in regards to hospital capacity etc, but some take even a month, so it lags far too much.

Logically, if new hospital admissions drop to the point of near zero, then this is over. Something we should know by easter.

Meaning Italy has probably made a mistake in extending the curfew. Maybe they shouldn’t straight out party now, but they should relax restrictions to allow factories for example to open while keeping bars and the like closed.

The concern of all is whether this will return and maybe with vengeance in autumn or winter.

As stated and as all know right now this is a pretty much nothing burger except that at the peak hospitals can be overwhelmed which is concerning.

But, the worry is whether this will return as so serious, rather than kinda well not really serious as is currently the case.

The approach taken right now therefore makes sense when viewed under that prism, and the warning this isn’t a two weeks thing but potentially months makes sense too.

Because if this returns as more serious, learning all this stuff about working from home and tele-talking and wearing a bandada on your face when walking, is a change that takes time and for now waving between doing it and not doing it might not matter, but it might matter in a few months.

Hopefully obviously this continues to be a nothing burger and we just have pretended it is for nothing, well for a few weeks for grandpa which is important, but you know.

However if this returns and with a vengeance, then this new normal might feel more normal, with potentially a new class of immune and not immune as some officials say they might issue immunity certificates.

It sounds like a joke, and fully dystopian, but we have kind of been re-living the last century, although in a softer form, as the script writers clearly run out of imagination.

For now where stock markets are concerned they have to price in some resumption of activity starting next week in much of Europe and US presuming it isn’t donkeys making decisions, and in two weeks pretty much everywhere, while also pricing in potentially dampened activity in general.

Contactless payments and the use of cards everywhere in the west to the point some have forgotten what cash is, should keep the fiat still afloat but the potential use cases of bitcoin have arguably been underestimated.

As a digital gold-like asset outside of the banking system you’d think there is hardly something more useful for diversification in the current circumstances and especially if there is a second wave because bread of course would come first, but maintaining wealth levels would also be useful.

However the value of money like assets depends on the velocity of exchanges. The more things are exchanged, the more is valued the facilitator of such exchanges, like money or bitcoin.

Yet, as much money printing should be expected in fiat, bitcoin should keep its value, especially as its inflation rate is now about to be that perfect 2% for the next four years.