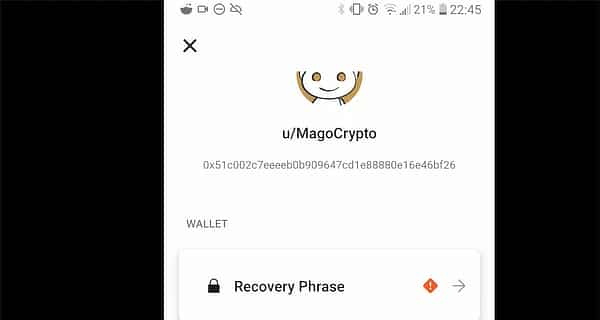 Reddit is apparently slowly rolling out a community points system on its Android app that appears to connect to the ethereum blockchain.

A video shows the app now has a wallet, for some people, and a brief tutorial says the wallet is running on the blockchain.

It is clearly on the ethereum blockchain because the address, as pictured above, is an eth address.

The address has not been used, so it may well be the app just attributes eth addresses to reddit accounts.

The reason for that is most probably because these community points are more a token, like the donuts.

If you’re not familiar donuts are an experiment running on r/ethtrader whereby those contributing to the sub are given donut tokens based on how much they’ve contributed.

These donuts can then be used for the right to post meme gifs within comments or to buy the top banner on the sub.

They can also potentially be used to vote in or out the mods according to Carl Larson who coded the donuts system.

For now Reddit is a dictatorship, literally, as the top mod in any sub has the power to censor, ban, etc.

To manipulate political discourse, therefore, is as easy as giving that top mod one million dollars or whatever, and now you have control over a huge audience that uses r/worldnews for example or r/politics.

We all know of how what was once a neutral sub, r/politics, became r/hillary overnight with Conde Nast, which owns Reddit, doing nothing about it at all.

They claim mods have full right to do whatever they want, with r/worldnews also becoming more and more controlled with heavy censorship that skews to the left or far left.

This repeats. R/ukpolitics, for example, was neutral to center-right, but huge censorship and vote manipulation has turned that too into basically r/labour.

That has led to huge backlash against reddit and growing public pressure especially amid louder and louder allegations of significant Chinese influenced manipulation and perhaps even censorship with Reddit partially owned by Tencent.

Thus with these points they might be thinking of allowing users to vote in or out the top mod, but that’s probably cover because it’s not clear why these points can’t be manipulated just as karma can, in which case why not just use the karma rather than these points.

Tech giants in Silicon Valley are worried. The public is starting to hate them because they have become too powerful and their algorithms are perceived as manipulative.

Calls to break up monopolies like Google, for example, keep rising. Censorship on Twitter of even prominent politicians is of course not without political consequences.

The law has an important role, especially the enforcement of anti-competitive regulations, but some in Silicon Valley think the way to take down these monopolies is with the blockchain.

What makes Google as Google is the vast amount of data it collects and then feeds into algorithms which give it the advantage of producing more intelligent results.

These data are proprietary. A start-up for example can’t tap into the search queries and the other relevant data like location, to then feed into its own algorithm which might do things better.

Meaning one can’t quite compete with Google, except by opening up the data.

As it is the data that makes Google as Google, the tech giant can not compete by opening up its own data because it is that data which makes it relevant.

If this data however is made available to all through immutable distributed systems, like the blockchain of course but also things like IPFS or really even systems like IRC, then some kid in his basement could well do a better job than Google and thus we open a wave of innovation.

And we all love innovation, of course, but looked from Google’s point of view this disruptive innovation can be a threat.

So bringing us back to Reddit. There are a few experiments going on in regards to distributed social media that can link to the blockchain as well as all these other systems which are already functioning and proven or which are being developed.

Because all this is cool and new and interesting to techies – kind of the thought leaders who then send the ‘sheep’ to whatever app or platform – Reddit knows it is at risk of disruption, and therefore are probably just trying to copy some of the ideas as shown by these community points.

We’ve all heard of Libra, of course. That was Facebook’s attempt to basically kind of propriaterize the blockchain. Telegram is engaged in a court battle with SEC in regards to their own token, with the current giants basically stopped in their tracks where crypto is concerned.

Reddit is trying to be more under-radar and as they’re using ethereum’s blockchain there may be less concern about proprietarizing the new field, but instead of innovating they are basically copying, and that’s good news for entrepreneurs as they have an opening to move faster than what has now become corporate bureaucracy in these tech giants.