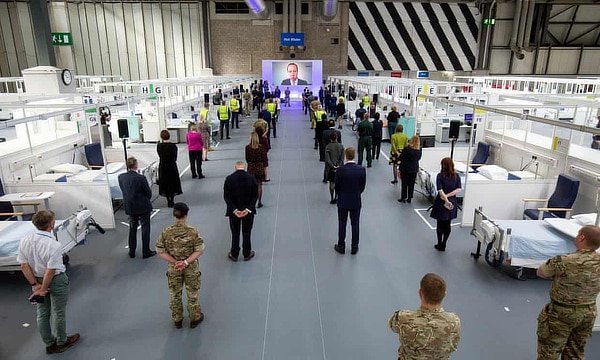 The United States central bank now owns 29.1% of US GDP in an astonishing expansion of the power and wealth of bankers.

Fed’s balance sheet has now risen to a new all time high of $6.4 trillion with the total assets it owns rising by another $284.7 billion according to Bloomberg data.

That makes it equals to 29.1% of US GDP, a fresh new record. In addition, since Fed announced its bailouts on March the 15th, it has printed and handed to Wall Street $2,055.9 billion.

To Wall Street and specifically commercial banks because they’re the ones that ‘sell’ these trillions to the government after Fed just gives it to the commercial banks at an interest rate of zero percent, meaning for free.

The government, meaning American citizens, have to then pay back this money they ‘borrowed’ from others who printed it out of nothing, and though that is now at a low rate the citizens are hooked on it for decades, thus eventually may pay 2% or more.

The middle class therefore gradually not only gets paid less, but also in relative terms has to pay more for a house than their parents.

This has been the process since the 70s when the gold standard was ditched after long legal battles at the Supreme Court.

Since then, manual workers have seen their wages decrease, while the middle class has stagnated. Leading to less economic dynamism and thus very low growth or none at all.

At the other end this cheap printed money is easily accessible by the rich who use it to take ownership of assets and equity in companies, leading to a centralization of the economy in the hands of a handful.

At that point, the nation descends into dictatorship (picture relevant, Matt Hancock, British health secretary, in an echo of 1984). Not overtly. It is still “the people’s” republic of North Korea. They still vote with a super majority of 90% for Kim Jung-un under a media environment that forces self-compliance by those reliant on the state handouts, like much of America and Europe currently.

These ladder climbers with no morals then snitch their neighbors to the point police in Europe had to tell people to stop calling them to report non self-compliance.

An invisible enemy is of course the best of excuses to grab this total control with it done so effectively in the United Kingdom to the point the streets are empty even though the government says you can go to work if you can’t work from home. They say:

“The government is not saying only people doing ‘essential’ work can go to work. Anyone who cannot work from home can still go to work.

Separately, there is a list of critical workers who can still take their children to school or childcare. Provision has been prioritised for these workers…

We have also asked certain businesses where people gather, such as pubs and most shops, to close.”

Unlike what the media has led everyone to believe, therefore, the only thing ordered to close is pubs, restaurants and the like.

Car manufacturing can continue. Factories can keep working. Shops can also open, unless they’re barbers who can do home appointments, or obviously unless they’re socializing places.

For this reason the only help the government is giving to any non-socializing business, or to the self-employed, is to claim unemployed benefits.

Yet their message on TV is stay at home, and of course it is that what everyone hears. So factories and the like have closed, with the government taken aback by the huge plunge in traffic, yet has taken no steps to clarify that anyone who can not work from home – regardless of their job save for the very limited list – can go to work.

So they’re extending the lockdown because presumably in their mind making variations means opening bars or schools, when in everyone else’s mind it’s more about whether they can go to work in the non-social environments.

Presumably they thought Brits would discard what they were saying, and so they’ve gone to the very extreme in their message, and even after realizing it, they’re doing nothing to change their tone.

To the contrary, they’ve taken presumably very expensive ads that act as the very front page on pretty much all printed papers, with the paper’s section at the local shop covered in blue and just two words: Stay at home.

We are staying at home! Their data says so. Therefore another interpretation could be this is double speak. The “people’s republic,” or you can work, but STAY AT HOME.

And since everyone is now relying on government handouts, approval is ‘90%’ says the brainwashing media.

Boris Johnson’s approval rating has apparently gone up even though he has been off for now weeks, with no one sure they plan to ever relinquish this power they have suddenly grabbed in contravention of the constitution.

That’s even while hospitalization rates continue to fall, down by more than 1,000 since last week to now just 18,700 across the United Kingdom being in hospital with this.

Newsnight, held at times to high regard, lied to the public last week when they said there were 19,700 admissions in the past 24 hours.

Since then in the briefings it has been made very clear it is the total number of individuals in hospital with this. Just less than 19,000, same as during any ordinary flu season, and rapidly falling.

So people are suspecting more and more that this is an attempt to institute dictatorship by the government taking over the economy and the freedom of movement guaranteed by the Magna Carta (and the US constitution) which for one thousand years has limited the legal enforceability of acts of parliament or decrees.