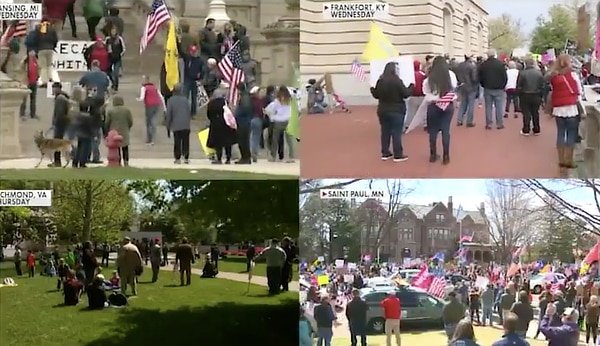 Eth is up too, rising by 7% to above $180, its highest level since martial law was imposed on Milan in early March.

There have been protests in Michigan, Minnesota, North Carolina, Kentucky, Ohio, Utah, Virginia and Florida. Demonstrations are scheduled for Pennsylvania, Washington, New York, Maryland, and other states.

Donald Trump, the president of the United States, cheered them on in a series of tweets that said Liberate [state].

In Wisconsins even the Sherif has revolted against endless lockdowns, stating according to local media:

“I cannot in good faith participate in the destruction of Racine County businesses or interfere in the freedoms granted to all of us by our Constitution. We will leave the enforcement of public health orders to the health department experts.”

Lawsuits are flying in USA. Some are directed personally against “experts” in the health bureaucracy. Like Amy Acton, the director of Ohio’s health department who has been nicknamed “Doctor Death” by some of her critics.

Some lawsuits are aimed at governors themselves for breaching the constitution, while some state lawmakers say they will look at potential legal proceedings that do not involve lawsuits.

“Quarantine is for sick people,” says Eric Moustos, a former police officer who now works in solar energy, “but when you lock healthy people away that’s tyranny.”

That has been the refrain across this movement which has spread like wildfire as people rise to make their voice heard in the face of the media telling them 90% agree with endless lockdowns.

Europe remains docile, except those 5G towers they keep bringing down everywhere across the continent, especially northern Europe.

Hong Kong remains quiet too as their authorities lock-up 14 organizers of the Free Hong Kong protests, tacking advantage of the ‘we’re all dictators now’ atmosphere.

While in South Africa, they have descended into chaos. In Kenya, police shot two protesters. Local media says:

“‘Mr President we are in the middle of a food crisis. It’s war out here,’ warned Joanie Fredericks, a community leader in Mitchells Plain township in Cape Town.

The desperate plea was made in a video posted on social media to South African President Cyril Ramaphosa who imposed a five-week lockdown to try curb the spread of the coronavirus.

‘People have broken into tuck shops. They have attacked people. The simple reason is because they are hungry,’ she said from a kitchen dishing cooked meals into packs for distribution to the poor.”

Anger keeps growing by the day as it looks more and more likely they have no real plan or intention to actually lift the lockdown which they stated was temporary and now keep being extended.

In addition, although they promised huge support with trillions flying everywhere, it all translates to just $1,200 per American, while in UK and other countries it is very much zero for non wage workers except for unemployment benefits and some support for a very limited number of businesses.

This is thus hitting most the lifeblood of the economy and of society in general, the small business owners and the self employed who keep things running day to day and who ensure the great prosperity we’ll hopefully still have the chance to enjoy.

It is precisely those small business owners that are taking to the streets of America, joined by all others who they employ or serve, in addition to numerous other groups that are now fed up.