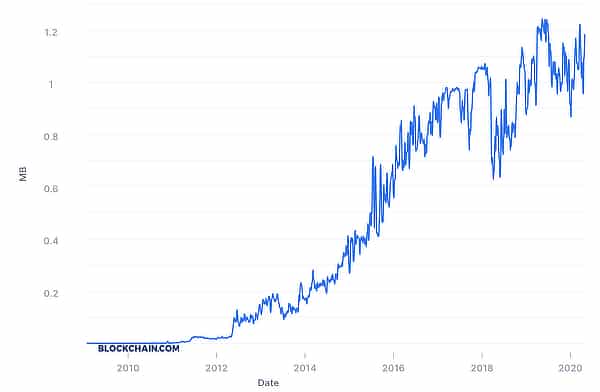 Demand for the bitcoin network is near the highest level it has ever been with 1.27 megabyte of transaction data now processed every ten minutes.

The highest that has ever been processed is in February 2019 at 1.3 MB, with bitcoin currently having about 2MB of capacity per ten minutes.

That’s double the current capacity of ethereum, which has 15 second blocks but by bytes runs at the maximum capacity of 1MB per ten minutes.

The above chart stops on April 28th, so a few days are missing, with likewise a real time inputs and outputs chart not quite available.

As you may know bitcoin transactions are a complex matter in as far as one ‘transaction’ can be sending payments to many different addresses.

In ethereum a transaction is counted as a payment to one address, while in bitcoin the equivalent would be outputs which was at around 900,000 a day in late April when the chart stops, with the December 2017 high being one million transactions a day.

More than half a billion transactions have been made in total on the bitcoin network since the genesis block on January 3rd 2009.

It’s not clear what the number of total outputs is, but as in general they seem to be 3x the number of transactions, then it is probable 1.5 billion payments have been made on the globally decentralized monetary network.

Some 65MB worth of transactions are currently waiting to move even while there is or should be around 0.8MB of available space in each block.

It might not be utilized because to access it one has to use segregated witnesses (segwit), a once controversial upgrade but that debate has long gone so you’d expect general utilization of it at this stage.

Segwit changes the blocksize which is still referred so for convenience but it is now more an accounting abstraction with the actual 1MB limit acting as a base of sorts.

Meaning to increase capacity all one has to do is to change the weight of 4MB to 8MB which then increases the practical capacity from 2MB to 4MB.

Currently however there is still a reasonable amount of available space, with numerous methods available to compress transactions through bundling them so that instead of using a plain transaction of 250 bytes, you add inputs and outputs, each of which is what we normally call a transaction but in this way they take only about 20 bytes.

Once capacity goes around 1.7MB, then you’d think they’d upgrade with a soft fork which means only miners have to opt in for the upgrade to kick in.

That’s because the soft fork would be backwards compatible, so non upgraded nodes can still validate their own transactions and blocks and keep running as usual.

While in a hardfork everyone has to upgrade at once or they’re off the network, with the initial belief that a hardfork was required to increase its capacity being a big reason for the blocksize debate.

The Segwit solution gets around it at the tradeoff of practically facilitating half of the maximum capacity.

So a miner could create a 4MB block filled with garbage when only 2MB is usable, meaning in capacity planning you have to account for 4MB or preferably more depending on your risk equations.

Regardless all that is now ancient history, with the bitcoin network as it stands in the end so ending up with more capacity than even eth which at the time was claiming a capacity of 14 million transactions a day but as it turned out it actually had the same as the then 1MB limited bitcoin and now has just half of the segwit upgraded bitcoin network.

Ethereum plans to experiment with sharding which may go live in 2024, while bitcoin probably wants to see first whether that sort of thing actually works.

Until then bitcoin’s strategy seems to be to move at the speed of 1/10th or even 1/100th that of Moor’s Law presumably just in case no one can figure out pruning or sharding or any of the many other experimental base layer potential solutions to capacity constrains.

That is so as to allow anyone to reject the bitcoin network if they want, that is to chain-split fork, and thus so maintain the ultimate guarantor of decentralization and honest behavior at the protocol level.