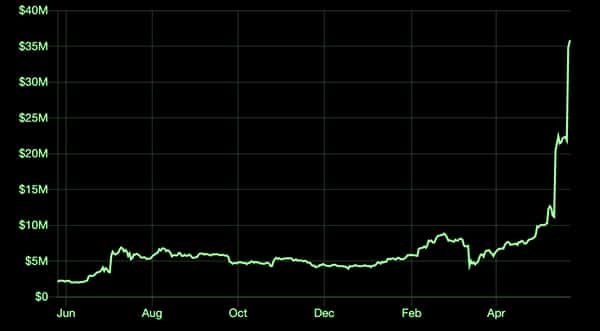 WBTC spikes to rise in holding four times more than the Lightning Network, May 2020

Ethereum may well turn out to be the second layer of bitcoin after a considerable spike recently.

That’s because the amount of tokenized BTC has suddenly jumped some 4 fold, from about 1,000 bitcoins to now near 4,000 as pictured above.

That is significantly more than on the Lightning Network (LN), which for years has been promoted as bitcoin’s solution to scalability, where just about 900 BTC ($8.4 million) is stored.

The comparison admittedly isn’t too perfect in as far as one can’t easily run away with your coins in LN to the same degree as the defi consortium managing the tether like WBTC potentially could, but practically they both are effectively bitcoins with both having their own problems.

The biggest problem for LN is that it can’t quite solve the double spending problem without practically requiring some intermediaries like trusted ‘watchtowers’ or ‘liquidity providers’ in addition to potential systemic issues that amount to the equivalent of a bank run if all tried to close their channels at the same time while the bitcoin network can’t handle the spike in demand.

While the biggest problem for WBTC is either potentially a hack, from external or internal rogue operators, or far less likely the somewhat established and fairly reputable custodians for some reason go rogue.

Arguably and somewhat conceptually there can also be a fractional reserve problem which can be mitigated by the fact these are two blockchains, rather than a fiat and blockchain tokenization as in tether.

One can therefore see the amount of BTC held by the custodians on bitcoin’s public blockchain, and so can easily audit whether it corresponds to the tokenized amount on ethereum’s blockchain.

Yet if it doesn’t, there isn’t much one can do about it except for expressing outrage on social media with potentially some PR firm sending sock-puppets to argue fractional reserve banking has been used for years so who cares, with people then – depending on just how much utility there is – kind of eventually going meh, who cares.

Or there’s a Lebanon style reserve banking where the deposited coins are kind of leveraged in as far as they could be put down as collateral without moving them and thus without revealing they have been pledged to something, with the public then eventually informed all these debts have been taken and there is now no more money.

It remains to be seen whether for WBTC or tether, which kind of does the same but in a more trusted way due to lack of audibility of the fiat backing the tokenized dollar, whether the lack of full reserves would actually matter as far as the peg is concerned.

It didn’t for tether – which had some $1 billion seized and yet still maintained full peg – because fractional banking does work until it doesn’t.

But here we have more of a gold standard and then the fiat running on it, rather than more traditional reserve banking where it is more fiat for fiat.

The gold standard ended in 1975 when America reneged on its promise to pay gold for the pieces of paper it prints, yet the dollar still has some – albeit falling – value.

So here too WBTC or USDT may potentially take a life of its own and so continue operating, albeit at a far lower value, depending on how much use people find for it.

For WBTC its use is in providing access to the fairly dynamic and innovative decentralized finance (defi) space where semi decentralized exchanges and semi decentralized dapps allow for fairly permissionless leveraged trading in addition to pretty cool things like flashloans which bitcoin’s script coding language can’t do regardless of how much they expand it as they are trying to.

That makes it possible to practically hold bitcoin while also playing and participating in decentralized banking where bots are free to roam the global computer network.

So creating a very complementary relationship between ethereum and bitcoin that serves both in providing bitcoin with the aim of a bank in your pocket while giving the ethereum network the store of value that bitcoin’s fixed limit provides.

In contrast the Lightning Network is more for preferably frequent payments – as in spending – which has its uses but requires a restart of the commerce adoption process with about a decade of progress on that end wiped out as far as LN is concerned.

Therefore LN has a far steeper mountain to climb than WBTC which for early adopters has its clear advantages and more numerous advantages as well as the constantly ‘proven’ risk of the safety of its custody in as far as the longer they continue to show the bitcoins are there, the more trusted presumably they become even though theoretically the discovery of some flaw on the custody process isn’t necessarily subject to the length of time except perhaps by degree.

And so the story here is not WBTC v LN, but more that almost precisely a year after it launched, WBTC appears to be gaining more trust.