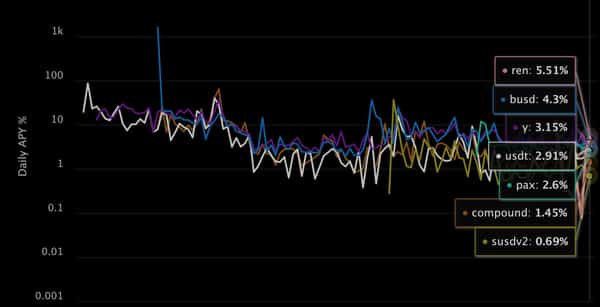 An interest rate of 5% a year in bitcoin beats any savings account and nearly beats even stocks.

Yet that’s whats on offer by a new defi dapp called Curve with its focus being to “provide a mechanism to create cross-markets for stablecoins in a way which could be called ‘Uniswap with leverage’,” they say in the technical paper.

One usdt for example and one dai are both meant to be one dollar, but there can be small differences, like one being 98 cent while the other is $1.02 and at times there can also be different levels of demand.

To take advantage of these differences, Curve allows you to deposit into pools where there can then be swaps, market making, arbitrage, and bot trading.

The Curve Ren pool above holds renBTC and WBTC. This then enables renBTC everywhere wBTC is accepted, like as collateral on MakerDAO.

Ren is a fairly new way of tokenizing bitcoin with their claim being they can do so in a decentralized and trustless way, at least eventually.

So if you have renBTC and want wBTC instead, you can use this pool, or vice versa, with both here somewhat manually pegged so there is no price arbitrage, but there is what can be called demand arbitrage.

Meaning some people might want more wbtc than renbtc, but both deposited assets get a variable interest rate that so far for this pool has been at a total APY of about 5%.

The interest rate changes depending on how much is deposited and what market making or price/demand arbitraging opportunities have been taken with the profits then shared with all pool participants.

On Compound, for example, you get almost nothing for lending your bitcoin as that depends on the demand to borrow it which is at a somewhat high interest rate of 3% for this very volatile asset.

Here however you get a lot more in interest partially perhaps because there is little liquidity in the pool and because “Curve pools do market making and some curve pools combine market making with lending, earning both,” says Michael Egorov, the founder of Curve Finance.

Egorov was a senior software engineer at Linkedin and also founded NuCypher, an encryption layer for Big Data with this company incubated by Y Combinator.

He has now founded Swiss Stake, which appears to be the ‘parent’ company of this dapp with Egorov saying “when I named the company, didn’t think of Curve, but thought about liquid staking.”

There have been some investors. “Just some angels now. Deliberately didn’t raise a fomo megaround,” he says.

There has also been a code audit, so all seems fine although of course the only real audit is by the Nakamotos across the world who probably won’t hesitate to take all the coins if they can find the tiniest little bug.

So depositing is risky, especially in these early stages, as there may well be some bug somewhere with you loosing all your money, but that applies to all the dapps.

So now to the hard bit. This uses advanced bonding curves, which sounds complex, but it is somewhat simple. Egorov says:

“Advanced or not, in bonding curves, you make a dependency of quantity of one coin on the other in the pool.

Or when there are many coins, that’s bonding surfaces. Just a mathematical relationship between quantities of coins.

Why bonding curve – that’s because for 2 coins it comes as a dependency, like, quantity_of_dai(quantity_of_usdc) or something, which makes a curvy graph.

The best asset to think about joe curve affects it is susd. Maybe a half of its supply is in Curve. In brief: Curve stabilizes it.”

Synthetix’s sUSD is pegged to the dollar with the curved swapping provided by this dapp so stabilizing its peg according to Egorov.

A dapp that is quite new, but still has been growing very quickly with one of its pools, Curve S, shooting to the top. While Ren is nearing there, zig zaging to 14th position yesterday, now taken by Curve Y.

The above are the top ten, something we haven’t quite seen before with these pools kind of being underground things.

They are the back-end that makes it possible for you to exchange wbtc for eth in an instant on Uniswap or Balancer or tons of other established and new decentralized brokers and exchanges.

Balancer for example is very new with us covering it only this February, but it has managed to jump at the very top because it is quite innovative.

Curve has been growing fast too, which is why it grabbed our attention, and with such high interest rates, you can easily see why it is attracting depositors.

Depositors of course being the name of the game here in the underground outside of the prying eyes with even the above stats site seemingly being a new dapp of sorts that appears to run on the blockchain because it is very slow.

Meaning the world is changing and we’re not quite feeling it or realizing it, but a lot is going on in the financial world of ethereum smart contracts.