Has Defi Bottomed The Ethereum Ratio?

Comments Off on Has Defi Bottomed The Ethereum Ratio? 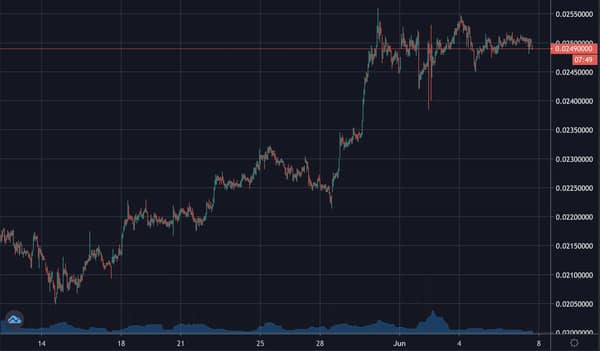 Ethereum’s value against bitcoin may have seen its lowest point after a mini bull run recently as pictured above.

It has been rising since the 14th of May, with an attempt to restrain it by bitcoin maxis at the opening of this month failing and quite considerably.

More importantly however, ethereum’s ratio has been rising since September, zig zaging at times but since then it appears to have moved generally in just one direction.

We’ve zoomed out a lot here at the expense of the point we want to make, but if we had chosen the starting point as September, then the rise and even a double bottom would be a lot clearer.

We’ve zoomed out however because we want to show the far bigger potential trend with the ratio currently being at a resistance line.

So our suggestion that it may have bottomed is probably not helping because of the contrarian traders, but we can clearly see why bitcoiners tried to make it dive as the attempt was at a pretty ‘perfect’ level.

A failed attempt, with it unclear whether that tells anything, but on hourly candles the ratio has been sidewaying recently.

In these daily, but very zoomed out candles, it has also kind of been sidewaying, but with a bias towards increasing in value.

Still of course no where near even early last year levels, let alone 2018 or 2017, but plenty would be relieved at just the fact it hasn’t been falling for now months.

Inflation may have had something to do with it as well as it was about 7% for eth and 4% for bitcoin before eth lowered it to about 4% last year, but now bitcoin has lowered it to 2%.

A loss of confidence in mid-2018 regarding the shelving of the then proposed staking design may have also contributed.

With the general bear market also playing its role too, but maybe not in regards to eth’s value against bitcoin except that perhaps the above factors contributed to people diversifying into btc.

So why is it now rising? Well, the new design of staking is not far away from launching in some months. Coders in particular may see some of the capabilities of eth, which bitcoin doesn’t have, like its use of zk tech especially for dapps and scalability.

In regards to the latter, both main networks are pretty much clogged currently, but for dapps scalability maybe has been solved, at least to a reasonable extent.

The problem is perhaps that this space is becoming too big, which is a good thing obviously but while previously dapp coders could potentially do everything themselves, nowadays it is probable that specialization is developing.

Dapps therefore have not incorporated these scalability methods because they are very new, but also because they don’t quite know how.

So maybe we should expect the rise of consultants and/or outsourcing dev studios specializing in scaling or whatever, because these sublayer capacity increases do require detailed specialized knowledge of a growing mini-field where there is some competition with different methods used to achieve the same end: to allow the dapp to handle 2,000x more transactions than simply blockchaining everything.

Price and ratios of course being forward looking, that all this hasn’t been utilized yet might not matter more than that it could be utilized with obvious benefits and thus obvious incentives to utilize them especially as the defi space in particular is starting to become competitive.

Decentralized exchanges running on ethereum, for example, have handled $3 billion this year. That’s a lot of money in a growing trend.

It is also just one example, with the opportunities here multiplying with each ‘good’ dapp that is added to the network because there is now something more for your bot to do presuming you’re a skilled coder and can keep up.

Unlike in big exchanges where bots race at sub-seconds, here the space is still fairly small to probably not have that much competition, so kids can have productive fun without yet being kicked out by the big boys.

And there’s a lot of toys to play with in the defi space. So why would you just sit on bitcoin watching a price ticker all day when you can rock and roll on eth at least with some of your savings? That’s maybe what the market is asking if this ratio thing is telling us anything.