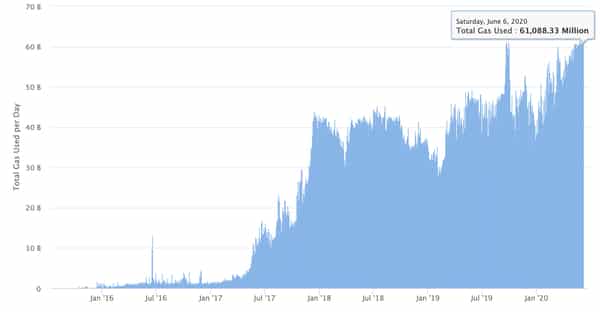 Ethereum is currently operating at full capacity with some contract transactions costing as much as $4 and even $7.

Gas is at its highest level of usage (pictured above) and has been for a month now. Average fees have been rising and even simple transactions are nearing 25 cent.

Even 5 cent is too much, Vitalik Buterin said once, but the problem is not really felt in simple transactions. The concern instead is dapps which require a lot more gas – and thus eth fees – than just a plain transfer.

These are the biggest gas users with gas being a unit of account, basically capacity. The top four, excluding Tether arguably, are scams with it unclear actually whether they’ll be one of the early adopters of new scaling tech or the ones who’ll never care.

Dapps are by far the biggest gas users as a category so if they can super compress transactions to slash by maybe 1/2000th their onchain usage, then there can be some capacity for new dapps and simple transactions.

Urgency therefore is rising for them to implement new tech. Some of whom have already began doing so.

Tether, love them or hate them, when it comes to onchain usage they’ve been nice. They started off by clogging completely the ethereum network just by themselves, but they quickly sorted out whatever gas miscalculations they were making with this token now planning to use sublayer scaling.

There are different methods and different projects offering these methods, but they all kind of work the same. You deposit into the contract, with the contract itself being the dapp or the token, and then you keep account of ownership changes in the contract itself, rather than going to the blockchain all the time.

Eventually obviously you settle it on-chain, compressing 2,000 transactions into just one. Something Tether plans to do by utilizing OMG’s method of this sublayer scaling.

Loopring seems to be what OMG wanted to be with Loopring Pay just launched recently to complement their decentralized exchange.

Unless we’re mistaken, they’re more adapting than inventing, using in this case what are now being called zk-rollups. We’ll let a Loopring rep speak:

“All Ethereum addresses that register on Loopring.io are mapped to an off-chain Merkle tree, where they have a corresponding Account ID. Deposits into a smart contract also map the balances to respective ID.

For a change to happen to the state of this structure, a user must sign a message (a request to transfer or trade) with their wallet’s key.

The Relayer aggregates ~1024 to ~4096 of these requests, batch processes them, updates the Merkle tree, takes the new Merkle root (which summarizes the state of the whole structure) and generates a validity proof that all updates followed protocol rules…

Loopring (the org, the people, wtvr) cannot access your funds, ever. Loopring team can disappear, turn evil, be leaned on by superpowers, etc… your funds are always only yours, claimable back only to the Ethereum address that deposited them on the zkRollup.

The whole point of a zkRollup is that its operators (the Relayer ‘rolling up the txs’) cannot be evil. Because all processes pass through ‘circuits’ to create a validity proof, with the allowable rules having been pre-specified in these ZK circuits beforehand.”

This was mainly used for the exchange where you can have many trades and then settle onchain, instead of settling onchain directly every-time like you’re some king or something that needs to be given way. That now has been expanded to let users also pay each other. A Loopring rep says:

“It’s a smart contract that you can deposit and withdraw from. By locking funds into the smart contract we can implement layer 2 logic that decides how these funds can be moved between accounts. To enforce these rules we use zero knowledge proofs.

To send ETH to someone you can either deposit it to their account directly using an Ethereum transfer, or if you already have the ETH inside loopring you can just use a cheap transfer inside loopring itself.”

So simple stuff conceptually, with IDEX moving to launch a new version that implements one of these methods as well.

Synthetix, which is a sort of pegged assets trading dapp that is growing in popularity, is also moving to scale with them choosing to use optimistic rollups.

Optimistic rollups are a method of data compression where fraud proofs are given only on demand, with some of the data stored on-chain, hence rolled up to the base layer.

Plasma keeps the data off-chain with a token also used in the OMG Network for staking to increase the stake for all these people/nodes to be honest during their account keeping.

Validium is a new one with it named only recently by a new decentralized exchange (dex) with this using zk tech while also keeping the data offchain in Merkle Trees.

We already looked at zk rollups, with these needing a ceremony. The Loopring one is a typical example where somewhat prominent people participate with only one of them needed to destroy the key.

So conceptually all this is simple stuff. You just plug and play one of these four squares above, put it under the smart contract of the dapp or inside it, and then by magic you get turbo charged scaling of as much as 2,000x current capacity and maybe even more.

As Loopring is showing this can also be for simple transfers, although that has network effects limitations as it can be used only between those in the same smart contract, or the same wallet at the front end.

While for dapps and tokens, to enter the dapp system you need to do everything you do to enter the sublayer system, so there would be no change from an end user perspective except for the better in as far as everything suddenly becomes a lot cheaper and lightspeed fast – or bandwidth speed more correctly.

Therefore the is no reason whatever for any and all tokens and dapps and even wallets to not employ one of these methods as soon as possible because we need to get the 20s going and preferably by yesterday.