Comments Off on London Chamber of Commerce Launches Blockchain Arbitration 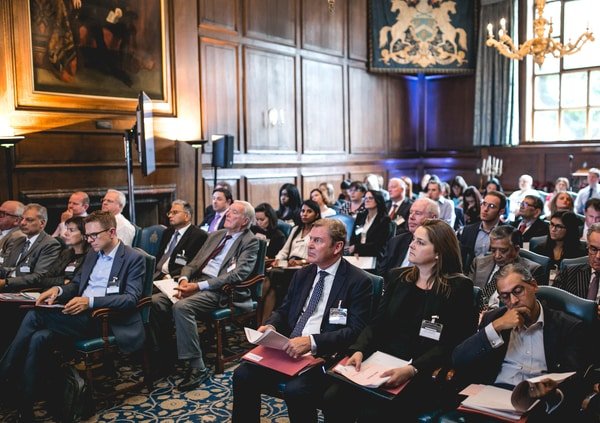 A new blockchain based platform for arbitration and mediation has been launched by the London Chamber of Commerce and Industry, which describes itself as the largest independent networking and business support organization.

Using blockchain technology, the London Chamber of Arbitration and Mediation (LCAM) provides “rapid and secure case management delivery, whilst a fixed-fee and cost-effective structure provides certainty to businesses regarding dispute resolution,” they say.

An industry paper says the chamber has 23 arbitrators and mediators including QCs, that being Queens Counsel which is the highest legal title in the private practice legal profession.

They being Anneliese Day, Harry Matovu, Lyndsey de Mestre and Sue Prevezer, making this a real alternative for business disputes.

For the blockchain part Marco can tap into ethereum, as well as other intranet like blockchains like Hyperledger or Quorum.

“Its the first time blockchain technology has been used in this capacity,” said Farad Asghari, LCAM’s manager.

That’s indeed the case looking back at our own previous coverage, but there have been talks about using blockchain tech as far back as 2017.

Dubai then in 2018 expressed ambition to digitize its legal system with the “court of the blockchain.”

It’s not until 2019 however when the legal profession was put on notice with Sir Geoffrey Vos , who sits at the court of appeal and is also the head of the Chancery Division of the High Court of Justice of England and Wales, stating trillions of smart legal contracts may be expected.

Smart contracts can be effectively contracts, but in code. They work best in the digital realm, where it is code ‘talking’ to code. There, the contract is self enforcing and autonomous.

A recent example of it is Compound, a code based financial application running on ethereum that allows you to borrow a different asset based on up to 50% of your crypto collateral, although you can go higher if you want to be a lot more risky.

The entire process is managed by the code itself, but until now there were backstops, individuals who could step in and change the code if something had gone wrong.

That backstop has been removed, with token holders now the only ones who can change the code, token holders so being in the traditional world pretty much shareholders of this code based business.

Token holders change it by someone proposing new code, then they vote, and if they adopt it, someone basically enters a command to tell the code they can now update with this new code. The smart contract then checks if all its rules are satisfied, and if there is indeed a majority, it goes ahead and incorporates what in the traditional world would be a new clause.

Where it concerns smart contracts that are acting as actual contracts in a way that has human involvement where that involvement is not code based only, then things become quite a bit more complicated from the point of view of self-execution, but from the point of view of a traditional practitioner, they become a lot more familiar and with this announcement they’re already starting to become part of their job.

That’s because in this Chamber of Commerce setup, the blockchain part is more paper administration, but now in a digital form.

The difference from previous setups is that you’re sharing something like a PDF, but the Defendant here or the judge can now not only see the PDF, but can also write on top of it or refer to it on the digital platform without actually changing the PDF itself.

So it’s basically a sort of document management system where everyone can be sure the document itself has not been changed, while at the same time everyone can share messages or can communicate with each other digitally regarding documents that have been put up or whatever else.

That’s familiar because in the legal profession sending pdfs of documents and reading them in an email is part of the job, but in a blockchain setup it can be a bit like it’s not just you in that email, it’s everyone else as well, including the judge.

It’s not too clear what the setup is exactly in this arbitration service, but basically you can have a paper hearing while it not being just the judge with the papers, but everyone else there too with the papers, but all obviously in a digital form and without necessarily needing audio or video.

Thus as often happens in the legal profession, if the judge needs some document or some clarification, you don’t need to wait forever for the mail or have a hearing about it. The judge can just put a note on the platform and you can get an email notifying you of what the note is.

They can do that with a database, so why have this blockchain? Well primarily due to security requirements.

Rare though they are, all practitioners at some point have come across a forged document. In a database, the admin can just change everything he wants. In a blockchain setup, all the information – including what the judge enters into the system – is replicated across many databases and if there has been a change to what has been entered, you can see it.

Making this from a tech perspective just an incremental improvement where one can say the blockchain part is just something that makes digitization a bit cooler now that we’re all very familiar with the internet, but also something that makes it a lot safer because it kind of replicates paper in that you can’t really change the document, but you can kind of put notes on it in a way everyone knows they are your notes.

From a practitioners’ perspective, however, this can be a very significant change which can in many cases avoid the need to go to court at all.

Whether that’s a good thing or a bad thing depends on your perspective because for barristers especially the hearings where the defendant doesn’t show up and yet they still get paid their huge premiums, are kind of the best part of the job.

But holistically the huge efficiencies here are self evident with digital courts now – just a website – a very realistic developing new area for techies and the legal profession.