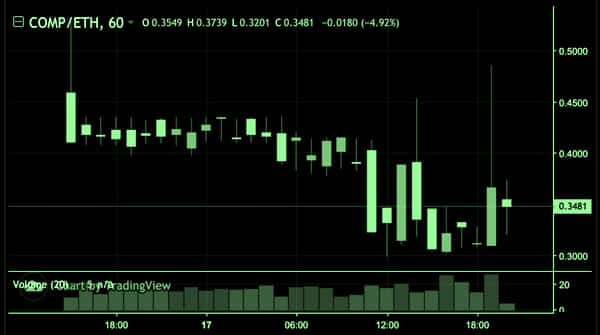 The first self-executing DAO token of scale since 2016 rose to as much as half an eth on a little known exchange called Bilaxy.

This new exchange does not seem to have much information about themselves, but the layout looks a bit similar to that of Binance, something which doesn’t necessarily mean they are related after Binance got shouted at by Chinese state media.

The trading volumes moreover are almost insignificant, just $36,000 in the past 24 hours, in great part because there aren’t that many tokens available.

Some 2.2 million held by the founders and team is vested for four years. Another 2.4 million is held by investors, with much of the rest of the 10 million total supply going to the dapp users at a 50/50 split between collateralized lenders and borrowers.

Thus little liquidity is available, but that there is something going on is shown by the fact a lot of people seem to want this comp token.

The launch of this token has had a very visible effect on the demand for using this dapp because those users get the token for ‘free.’

That has led to $85 million worth of assets being added to borrowing and lending starting on precisely June 15th which is when the public token distribution began.

We didn’t come across any mention that these token holders get anything, like ‘dividends’ or rewards or fees, but the new design of this dapp means the token holders can get whatever they want.

Provided they meet the governance requirements that is, which are a fairly low barrier as only 1% is needed to ‘gain’ a proposing address and we say gain because others can delegate their voting rights to your address.

Then just 4% of the total supply needs to vote. Provided the majority of them are in favor, the proposal – which is code – can then be activated by anyone through just a command that anyone can type.

That makes this pretty cool in many ways but also very, very risky because there is no backdoor here or anything, at the least on the governance contract which we skimmed.

We haven’t looked at the other contracts but the guardian address has been set to the zero address which has no private key.

So if anything goes wrong, then you can cry to mummy because no one else can do anything and this time there will be no fork (maybe?).

That said, the token holders are kings once this distribution progresses. So if they want a trillion percent dividend distribution to themselves or backdoors within backdoors or a strawberry champaign ascii art to show on the smart contract, then they can have it provided they follow the process, the rules, and the law of code.

Making this a new experiment in many ways. In governance of course, with it to be seen whether this time they can avoid the gestapo effect where as an illustrative example you get banned from Wikipedia by some clique for correcting outright disinformation.

Avoiding that would be very, very difficult, but there should be at least some years when both communists and capitalists can play with this new idea of global ownership of code by das le people.

Because soon enough the question may well be asked: is the company itself to be disrupted? That only the Nakamotos can tell us who hopefully this time are kind enough to reveal any bugs.

Where the regulators are concerned they won’t play here because this is a utility token, meaning the other part of this experiment may well be potentially a new public business model.