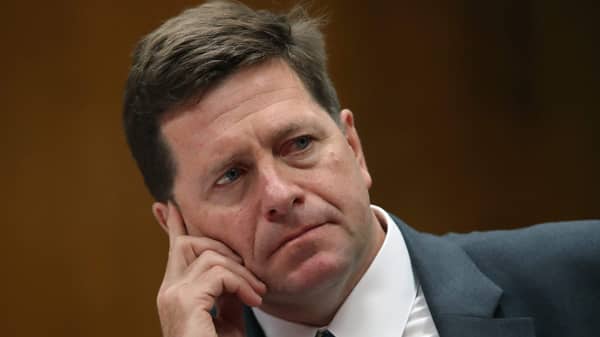 US President Donald Trump has expressed intention to kick out Jay Clayton, the chair of the US Securities and Exchanges Commission (SEC), demoting him to Attorney for the Southern District of New York.

“I am pleased to announce that President Trump intends to nominate Jay Clayton, currently the Chairman of the Securities and Exchange Commission, to serve as the next United States Attorney for the Southern District of New York,” the Attorney General William P. Barr said, adding:

That makes this the best news on the regulatory front since the French Finance Minister made a u-turn in 2018, initially expressing intend to come after bitcoin, to then not only embrace this space, but going on to become one of the biggest cheerleader with an announcement just last year they are to invest some €4.5 billion in an innovation fund.

“Whatever else, Jay Clayton leaving the SEC is a win for crypto and sound money fans across the world,” said Michael Arrington of TechCrunch who has also been involved in some tokenization projects.

“Chairman Clayton’s replacement will have a massive impact on the industry (for better or worse). Our chance at ETF approval & clarity on a wide range of issues for years to come hangs in the balance,” said Jake Chervinsky, General Counsel at the ethereum based defi dapp Compund.

We’d go further and say Clayton was the most powerful man in the United States second only to Donald Trump himself.

His actions have had significant consequences in the entire US economy with relations between the industry and SEC getting so bad they had a spat with even Elon Musk.

Just recently SEC closed down a potential competitor to Google. That’s just one of many innovative projects, with the Kin app in court fighting SEC, as is Telegram, both widely used.

Revelations of the discriminatory nature of the Securities Act 1933 may have contributed to the uprisings that began in France and then spread globally with their grievance boiling down to expressing anger at the different treatment of the rich and the rest by the law itself.

Perception changed with every action that SEC took based only on the fact the project had not registered with them, leading to a shift in the centre with money moving towards Europe.

Just as London rose to overtake New York as a financial centre in 2014 after very stringent crypto related regulations, so too Europe has become at this point where you’d want to be if you’re involved in this sector.

The effects of that shift won’t be noticed for months or even years, but the legacy of Jay Clayton may well be as the very symbol of a corrupt, out of touch, and a gatekeeping bullying bureaucracy.

The latest revelation by John Bolton that Trump told the Treasury secretary to go after bitcoin have undoubtedly caused him great political damage and within his own base which generally likes bitcoin as a tool for freedom.

Those revelations could not come at a worse time for Donald Trump as he faces a plunge in polls with many seeing this more as a referendum on Trump, than a Biden v Trump election.

An election that is expected to be very close, closer and tougher than 2016, hence the obviously symbolic gesture by the Trump administration towards this space to finally give us what we have asked since 2018.

If there is a u-turn, it would be one of many u-turns that this space has seen and by now through a familiar process.

Individuals in position of responsibility who generally have no clue whatever about this space save for some 5 second headline they may have seen, tend to dismiss it.

That Trump has no clue about what is going on in this space is obvious, not just because he is very, very busy, but also because he is very old and previously he was in an industry that has pretty much nothing to do with this space. So there probably were no opportunities to go beyond the five second headlines.

That may well have opened an opportunity for Clayton to form Trump’s views where this space is concerned.

As anyone in a high position, Trump too has to rely on the advice of others. It may well be the case thus that because Clayton did not like bitcoin, Trump didn’t like bitcoin.

In which case, we’ll forgive any past sins provided we now get a gift from the United States administration.