Comments Off on Race to Yield Farm Sends Defi to $1.5 Billion As Interest Rates Go Nuts 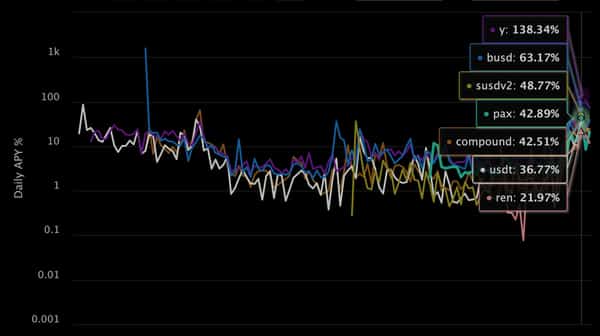 Interest rates are going nuts in a small corner of ethereum where the token business model has set off a fight for liquidity.

“Tokenized BTC liquidity providers will share 10,000 SNX and 25,000 REN in weekly rewards through the BPT distribution.

That said, BAL and CRV are still not available on the market, however, there are plans to launch the full public distribution in the near future.

So says Lucas Campbell of Defirate. Our translation of it is quite simple. There was a Compound token, now there are [enter dapp name] tokens.

The hot field that was already buzzing with bots running on maths equations, has now been thrown diamonds, sending all the wiz scrapping to add all these bonuses to their calculations.

Above is the extreme end of what is going on and even then in just one dapp. There is obviously little liquidity for many of them, but Aave’s lend pair with the tokenized dollar has had some $125,000 in liquidity at an interest rate of more than 5,000% a year.

We show this to point out just how hot this field was already for smart coders because you can get the bot to see there is so much demand for a token somewhere, and thus tell it to go borrow it and lend it or sell it and hopefully make some profit.

This, farming they call it to make it sound boring and keep you away, was given a turbo boost by a newcomer called Curve.

Even before the recent gold rush, Curve got our attention because it was giving 5% for tokenized bitcoin, while others were at 0.1%.

How? Well we’re not great at maths but by using a curve graph to manage supply and demand and in particular to manage the peg of pegged coins.

So if you missed geometry classes, the simple translation of that is it turbo boosts incentives for people to lend or borrow depending on market factors by making interest rates go very high and very quickly even if there is ‘small’ demand. Which all means obviously interest rates on Curve are quite volatile.

What they’ve done now is turbo boost it squared by adding a token which we haven’t even gotten around to even glancing let alone analyzing, but based on Campbell’s description above, it sounds like basically the Compound model.

That is if you lend or deposit on the dapp, you don’t just get the interest rate, but you also get some of the dapp token which gives you ownership over the dapp and thus benefits with the usual one being you get a % of the fees everyone pays to use the dapp.

You can now sell this token – if you’re dum at the current stage – and depending on the price you may be paid to borrow and perhaps even handsomely or if you’re lending/depositing then you get a ‘bonus.’

This is the boring bit where you get a warning about if hacked, then rekt, and nobody gone do anyfin about it (depending on circumstances presumably so haxors beware).

So be careful, diversify, eggs and baskets, hot and cold, don’t jump, learn to crawl first and then walk, and learn to code obviously.

Even in this ‘boring’ bit however there’s the pretty phenomenal overtaking of Maker by Compound in precisely 5 days, up from around $100 million to now king of defi.

Curve is not in this specific stats site, so our $1.5 billion number of assets under management is more correct and still most likely a considerable underestimate because Balancer is not on here either with that also being a pretty cool dapp and a 2020 boy.

Can’t blame them tho as this space is moving pretty fast with the incentives for entrepreneurs and innovators being very self evident as there’s a clear business model to be profitable by day one and potentially rich by day 10.

For users too there’s clear incentives as they’re basically the Wall Street boys, at a very small scale currently but one can easily imagine it being the Wall Street in ten years.

Because effectively they’re engaging in the funding or facilitation of capital formation as well as the pricing and the market making for setting the value of productive activity.

That’s what Wall Street does, but here it’s with code and bots and a completely open space and because of that it’s very fast, very dynamic, very efficient, and extremely meritocratic.

There are no guilds here, no gatekeepers, no bureaucrats, no laws or regulations except the rule of code and by that code alone value production is being facilitated.

It won’t last forever in this exciting form, but for now this is the bit to enjoy as there’s little reason to think it might not be the very formation of a new financial system.