Ethereum Miners Are Spamming the Network

Comments Off on Ethereum Miners Are Spamming the Network 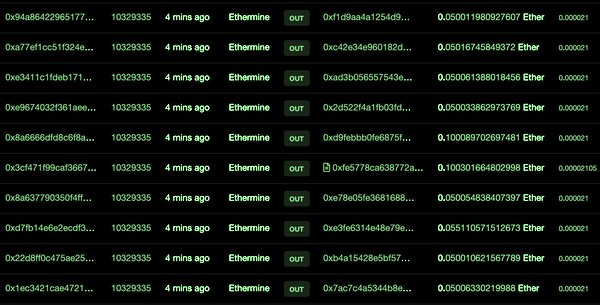 Ethereum miners are flooding the network with penny transactions and tens of thousands of them a day.

Ethermine is the worst, performing 13,200 transactions in the past 24 hours for usually 0.05 eth or even less.

Notice the page number, 132. That’s how far we had to go (100 transactions per page) to reach transactions older than 24 hours with this pool sending out so many transactions every minute.

That’s while others pay as much as $40 in fees in the case of Vitalik Buterin, the ethereum co-founder.

Fees that go to the likes of Ethermine and now amount to as much as 25% of the sum they get paid by ethereum holders in block and uncle rewards.

They seem to be doing it in bursts, having a quiet period and then they turn on some sort of machine, flooding the network with transactions.

So you can see here for example Nanopool made no transactions in the past 19 minutes at the time of the screenshot, but before it was on and on.

And it’s for small amounts. We’ve even seen 0.001 eth. That’s while people are paying $5 or even $10 for a smart contract transaction with the recent increase in capacity seemingly achieving nothing where fees are concerned.

The only legitimate explanation for this is that they’re sending earnings to small miners straight out and as they go, with each pool seemingly using some sort of very small threshold and automatic payments in bursts or continuously depending on the pool.

There’s no reason whatever however to not set such threshold at a reasonable level instead of a tenner.

That’s where automatic payments are concerned. If miners want to manually withdraw, then that’s a legitimate action. But constantly sending out tenners to the same address every day or as soon as the threshold is reached, instead of bundling them to a $10,000 payment or manual withdrawal, is straight out spamming.

Just to understand the scale, these pools in combination have made 50 million transactions. That’s two months of the network running at full capacity, amounting to gigabytes of data and hours added to synchronize an ethereum node.

That’s amid significant congestion when you’d expect network players to start using the blockchain very, very economically, not the very opposite.