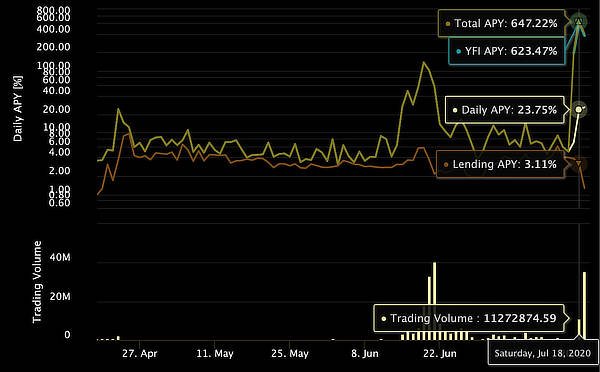 Depositors to the Y Curve decentralized finance (defi) pool have received as much as 2,000% in interest this Saturday, and in total about 600% (pictured) for the entire day, although annualized.

That’s after Yearn Finance released they YFI token to govern the Y pool that runs on the Curve defi platform.

This token has no value whatever, Andre Cronje of Yearn Finance said, and yet the market seems to completely disagree with him.

As soon as the token launched, the assets under management (AUM) in the pool jumped from about $8 million to $100 million.

The interest rate went nuts, from 10% a year to 2,000%, albeit somewhat briefly with these interest rates constantly changing based on supply and demand rather than being fixed.

Y pool has “control mechanisms, configurable fees, maintenance controls, and rules that can be modified. Thus far, these have been managed by us,” Cronje said, adding:

“In further efforts to give up this control (mostly because we are lazy and don’t want to do it), we have released YFI, a completely valueless 0 supply token. We re-iterate, it has 0 financial value. There is no pre-mine, there is no sale, no you cannot buy it, no, it won’t be on uniswap, no, there won’t be an auction. We don’t have any of it.

Earning YFI is simple, provide liquidity to one of the platforms above, stake the output tokens in the distribution contracts (we will provide an interface for this), and you will earn a (governance controlled) amount per day.”

Uniswap is a decentralized broker with many likewise platforms in eth and in quite a few of them people can list tokens by themselves, they don’t need anyone’s permission.

Both YFI and Uniswap confound SEC. The former because nothing is being paid for this token, so there can’t be a security. The second because there is no order book, and therefore it can’t fall within SEC regulations regarding exchanges that trade securities.

Meaning this defi space and this new token based business model is a very free environment right now with much innovation.

Yearn Finance for example is to launch Ytrade which “allows you to trade at leverage capped at 1000x with initiation fee pre-paid or 250x without initation fee. Ytrade allows trades between $DAI, $USDC, $USDT, $TUSD, and $sUSD.”

1000x is probably the highest leverage ever, anywhere, as forexes go ‘only’ up to 500x.

While this Y pool “does profit switching for lending providers, moving your funds between dydx, Aave, and Compound autonomously,” they say.

So it’s kind of like giving your money to investment managers to do things with it in the hope it leads to capital appreciation.

The investment managers here are bots, coded by usually pretty smart people, and many of them.

These individuals, plenty who make a living out of this now, crawl the web for any arbitrage opportunities, or any half long half short games, or any flashloaning, and if they find any they just take your deposit and use it.

All under the supreme command of the irrefutable, indisputable, unchallengeable, absolute dictatorialist code. So they can’t run away with your deposit because the smart contract code is the owner of it, and that code must be obeyed fully. Hopefully as intended because bugs, hacks, disclaimer disclaimer, can thief.

Depending on how many people want to use the funds deposited there for whatever they want to do, interest rates can go up and down with Curve especially known to have the most volatile of them all as this 2,000% shows.