Comments Off on Gold Reaches All Time High 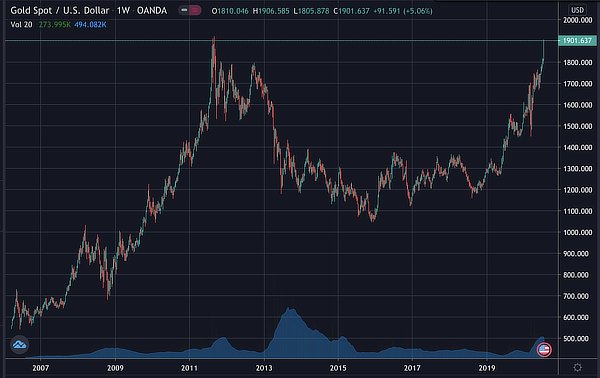 Gold has surpassed $1,900 for the first time in a decade and is now pretty much at all time high.

The last time it reached this level was amidst a global banking crisis that saw Brits queue up to get their money out of the now gone Northern Rock.

Some small bank runs have been seen in China this year too, but the biggest money printing in the history of money printing is probably the main reason for this recent bull run.

The European Central Bank (ECB) now owns about 50% of the Eurozone, adding some $2 trillion to its balance sheet in the past few months.

Fed reached 30% of the GDP in April, with it increasing since and expected to increase even more as helicopter money now becomes a sugary thing.

The fatness of government debt may be reaching the stage where at least for some of them they have to borrow just to pay back the interest on their debt.

Interest, let alone capital which will never be repaid as you simply can’t just repay so much money.

In ancient times they used to just cancel all debt once a century, but in our times we can expect more parabolic printing.

Some countries have already gone under. Lebanon is burning. Argentina is galloping in inflation, both being before the economy crashed 25%.

It’s not even over. Florida is the new New York apparently, same Texas. Both didn’t quite ‘participate’ in the first round, so both may be more first wave than second wave.

As productivity falls while money supply increases, you can expect debt to quickly get out of hand, especially because the deficit in uk has reached 20% of the GDP.

The good news for the printers is that people don’t know where to put their money, so they even paying some governments to keep it in bonds.

That means there’s plenty of money to go towards assets, especially those outside of the banking system like gold, which has been in its biggest bull run.