Comments Off on Decentralized Defi Oracle Debuts on Gnosis Dex 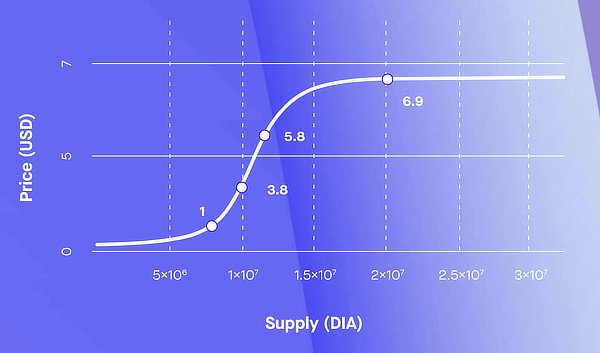 Decentralised Information Asset (DIA) is currently holding a token sale on the Gnosis protocol for the initial distribution of a staking token in a decentralized oracle feeds system.

“What makes this sale different is that it is structured as a bonding curve that runs 2 weeks,” Martin Köppelmann of Gnosis said, before adding:

“This means all the USDC that has been raised is automatically turned into buy orders to provide liquidity at that price level [currently stabilized at around $1].

This means that over the course of 2 weeks every buyer will have an opportunity to directly sell in case they changed their mind, with very little loss or even a small profit.

Overall this will likely mean that the price reached after 2 weeks will be much more stable.”

Now they’ve launched what they call a Gnosis protocol, which is described as “a fully permissionless DEX.”

“Ring trades are order settlements which share liquidity across all orders, rather than a single token pair, and uniquely suited for trading prediction market tokens and the long tail of all tokenized assets.”

This is what the Gnosis protocol looks like. In this case it is for dia, but this is more a template, something you copy paste with other token sales on this protocol having the same interface.

So you first go to balances, and here as you can see we’re trying to put in some weth, but the ethereum network is very much in demand currently and we have no clue what’s going on with Metamask. They too are probably very much in demand.

Once you weth it, you then just submit the limit order on their interface and you get tokens while the devs get the eth or dollars with 30 million initially distributed out of 200 million dias.

What makes this project interesting is its inclusion of kind of a jury really. We’ll let them speak and at some length:

So this sounds like anyone can submit things, presumably even semi-subjective things like did the astronauts splashdown safely. Subjective so being the wrong word since it’s a factual yes or no (well in this case) but it’s not quite something you’ll find in an API, at least currently.

To ensure this data is correct, there’s then the jury, or data analysts as they call them here, which can challenge the data and then people vote who is right.

The rest is somewhat easy. A jason parser them frogs call it in as far as you utilize a certain function within the ethereum network for smart contracts, and that makes the data from the api reside on-chain, meaning the smart contract can now talk to the data and can ‘know’ what it is saying.

As one might expect the dia team is a bit busy right now, so we couldn’t confirm whether there’s a testnet or mainnet for this, but a spokseperson did explain how this is different from Chainlink, stating:

“Chainlink is an important DeFi project, we have a joint investor, see them as interesting feedback and partner for us.

Also, I think the more assets flow into DeFi, the more a need for multiple oracle integrations into one product will become necessary for security reasons (something that is done in traditional finance for decades to mitigate attacks).

Also our model can be used as an oracle as a service, using DIA for a specific on-chain datafeed from Compound yield data, exchange volumes, GDP data or whatever is needed by the user.”

They say the data is immutable and stored in a hashed form onchain. You have to pay for the live data, in dia of course, but historical data is free for all with this spokesperson so arguing dia can itself be a data source rather than just a live feed.

So making this project potentially interesting as feeds are vital to many dapps and an important component in decentralized finance as well as the open source ethereum app store in general.