Comments Off on Ethereum’s Ratio Spikes Against Bitcoin 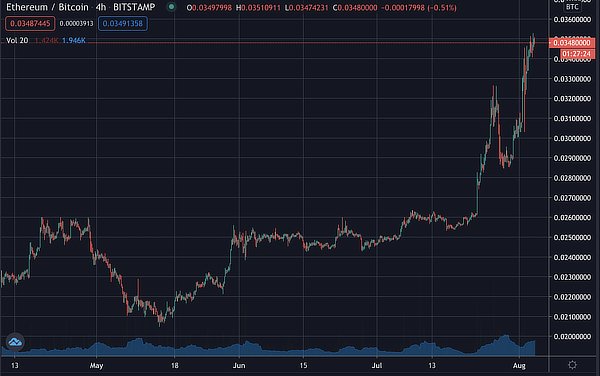 Ethereum’s value against bitcoin has risen to its highest level in a year, reaching the resistance line of now 0.035 BTC.

That’s still far lower than the 0.17 it reached in January 2018, but a new price level seems to have been reached.

You can barely see the recent price action above, but it is quite a bit more clear on the featured image.

It then fairly quickly recovered from the 30th of July onwards to briefly cross 0.035 while currently standing at 0.034.

That all means ethereum has been gaining in value against bitcoin and therefore eth’s fiat price has been rising quicker than bitcoin for the past two weeks.

The reason might be because a lot of the value that went to bitcoin during the bear years might now be feeling a bit more willing to take risk.

That’s probably because a lot of the then mini-exodus to bitcoin was due to the 2018 delays to Proof of Stake (PoS).

With the PoS testnet blockchain now launching in just a couple of hours, you’d expect the market to engage in some sort of price re-adjustment for staking alone.

Then there’s the decentralized finance space and the new token model with savings digitized in a native form, cutting off middle men and thus costs and so you’d think it would lead to higher interest rates than banks.

The current near 0.035 level however is a significant resistance line with it to be seen whether eth will take it.