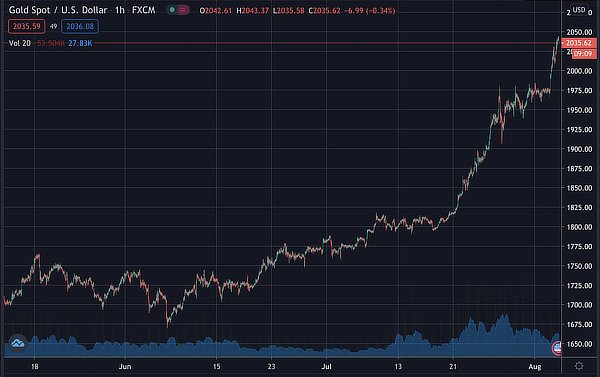 Gold is on a huge bull run and quite safely above all time high as it now surpasses $2,000.

XAU has been up against USD since November 2018 but it’s this July that has seen an acceleration in its green.

The reasons for this rise are now probably known. The dollar is rekt, down one point to 92 in its strength index.

Floods in China are adding a bit more rek to its economy, with the cny weakening too as of course is the euro.

Thus there haven’t been huge price movements between them, but huge amounts of debt have been taken by many governments that can’t afford it.

The three superpowers, US, EU and China, will probably be fine and may even come out of this better with millennials now starting to take charge and so sorting out some stuff, albeit snaily slowly.

But there are many other countries. The terrible tragedy in Lebanon was awful, but hopefully now we’ll probably have no choice but to go and help them, sort out the place and make it rich and beautiful again.

Russia’s Putin has been stockpiling gold since 2018, as has China, but its people are generally poor, just $5,000 a year per capita, and it’s economy was growing at a somewhat sclerotic 2% when its a very undeveloped country.

And then there are many smaller ones and even bigger ones that may have taken too much debt, thus leading to people hedging with gold as well as hedging with ethereum while there also speculating.

Ethereum has been flirting for a bit at this price level but cryptos are joining in the rise of pretty much all assets with oil up as well.

In UK now the economy is finally back in full swing. It was behind much of Europe, so there too the economy has probably been full swinging for at least the past two weeks.

In America, Trump has taken to interviews. Top form. Made one interviewer look very, very stupid. British interviewers when Trumpy? They know how to grill about things people actually care.

Great salesman and a great cheerleader for America where the economy is concerned, so USA too should be now getting to that full swing.

Stocks therefore are up again, although stocks don’t really care about the economy anymore. But it’s summer, sunny, and quite beautiful here in London so the middle class and up is now maybe a bit more relaxed.