Comments Off on Germany’s FCA Shuts Down Bitcoin ATMs 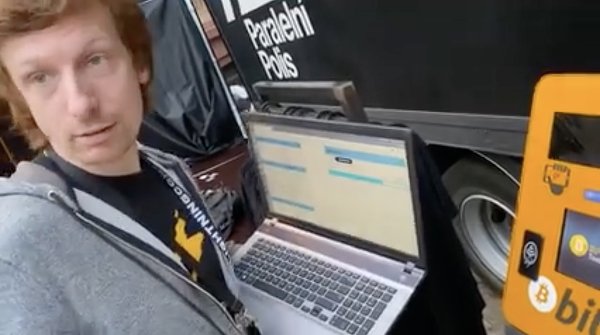 Germany’s Financial Conducts Regulator, BaFin, has closed the operations in their country of one of the biggest bitcoin ATM provider.

The action comes following EU level regulations which BaFin has interpreted as requiring bitcoin ATM providers to have a license for proprietary trading in accordance with the German Banking Act or a banking license.

To have this license BaFin now requires the responsible managing directors to have worked in a management position in finance for several years. Adam Gramowski, CEO of KKT UG which operates the Shitcoins Club, does not have this license.

“Now the machines are secured and the shops are officially sealed. A first confirmed closure is already in Cologne, the official seal bears today’s date [Aug 5 2020], as well as an official announcement in the shop window,” says local media.

BaFin required Gramowski to cease operations within Germany in March. The company did so, but then resumed trading under a new name and personnel with a traditional German paper calling them out.

KKT’s bitcoin ATMs have become well known for their cool design with it usually allowing a two way exchange whereby you can both buy and sell bitcoin and other cryptos.

It has a limit of €15,000, but that apparently is not enough for BaFin with it unclear whether they tried to reach some sort of understanding with Gramowski on how they can operate to the pleasure of BaFin.

You’d expect the first consideration for the regulator to be whether these requirements act as protectionist gatekeeping for the traditional industry which is in much need of competition.

That gatekeeping can also extent to convenience with many too lazy or too busy to go through the whole signing up with an exchange process, but can on their way to work easily diversify their savings in a bitcoin ATM.

There are many others but the most important one is what effect this will have on tech innovation.

As we recently revealed, China is now looking at 3nm chip processors, while to the anger of this generation, western companies do not even have 7nm out in production yet.

China is moving faster on that end because of bitcoin startups that have now become giants in manufacturing crypto mining hardware which has clearly had the byproduct of bringing innovation and competition to the entire hardware industry, while in the west that’s not quite the case for mining.

For ATMs however, these appear to be western and European produced. For example, the competitor to KKT, General Bytes which is pictured above showing Lightning Network integration in one of their ATMs, seems to be manufacturing these ATMs in the Czech Republic.

These are very sophisticated machines, and therefore you can imagine yourself what goes into producing them, and what second and third order effects there may be.

In addition, General Bytes claims to be “the world’s largest manufacturer of Bitcoin and Cryptocurrency ATMs.”

They’re still small compared to Intel, but all the current giants were very small once and there is no reason to think one of these new little ones might not one day become a giant especially as the ATM market is very nescent.

From that they can diversify, hardware wallets, which then gets to Raspberry Pis, and suddenly you’re close to having a new Intel or AMD.

Our elders should be proud of their own kids, and should be encouraging them as well as helping them if needed, but of course there also have to be regulations, but reasonable regulations not requiring seven years in banking to be a bitcoin manufacturer!

While where money laundering is concerned or any other crime, we do have cameras nowadays and Europe now has what looks like a very competent investigative agency, Europol.

It’s easy for traditional financial media to say all sorts of things and find some ‘expert’ to back them up because those fat cats don’t want competition in their too big to fail communism, but no one asked them what they want in this space, and since BaFin is a regulator in a capitalist market, you’d expect them to consider how to serve the public, not just bankers.

As no one benefits from a limitation of choice, or from unmeetable regulations which risk only sending hardware innovation to the real communism and authoritarianism of China.

BaFin in our view should go talk to Gramowski and act as grown ups dealing with a new market, instead of as a very very misguided gatekeeping police which pretends money laundering was invented in 2009 and/or pretends them bankers are not the experts at it.