Lebanon on the Brink of Revolution

Comments Off on Lebanon on the Brink of Revolution 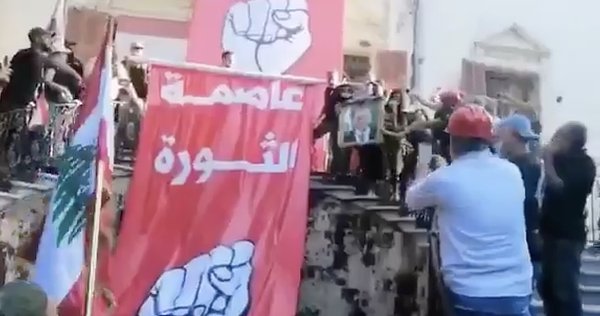 The Lebanese Foreign Ministry has been taken over (pictured) by protesters apparently led by retired Lebanese army officers.

“We are staying here. We call on the Lebanese people to occupy all the ministries,” one demonstrator said on a megaphone.

The takeover was aired live on local TV, with thousands demonstrating nearby and continuing to do so at the time of writing.

The Lebanese Ministry of the Economy has also been taken over as Lebanon now stands seemingly in the midst of a revolution.

Thousands have gathered on Lebanon’s main square with police or ambulance sirens heard alongside what sounds like constant fireworks.

Numerous parliamentarians have resigned while the world mobilizes to send aid and assistance to the tragically devastated port city at the edge of Europe which also stands next door to Turkey and Israel.

There have been many casualties but from the live audio the mood seems to be more festive-ish than deeply worrying.

It is unclear whether they have a leader or what follows next, but Lebanon is now clearly on the brink or in the midst of revolution.

At the same time huge protests are going on in Jerusalem with it unclear whether summer has finally arrived in the region.