Ethereum Defi Dexes Near Half a Billion in Daily Trading Volumes 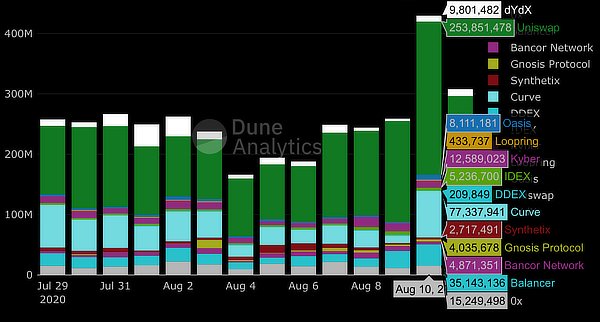 Ethereum based decentralized exchanges and defi dapps are now handling $400 million in trading volumes a day.

That is significantly more than just three weeks ago when it was at about $100 million, growing week on week at 23%.

In addition some $2 billion has been traded on ethereum dapps within just a week, more than all of last month and twice more than in June.

Uniswap in particular has seen a huge jump from about $60 million to now near $220 million.

While Curve has risen to handle as much as Uniswap last month, with this dapp being more arbitraging and market making instead of an exchange between different categories of assets.

Fairly impressively, Uniswap has handled $1 billion in the past week, accounting for half of all volumes.

That’s more than what some prominent centralized exchanges handle, with all Uniswap trades being on-chain.

Therefore they can’t be faked without paying a high cost especially currently with the ethereum network at full capacity.

They apparently have plans to incorporate some smart contract level scaling to facilitate more and cheaper transactions, but that’s a fairly complicated endeavor and thus might take some time.

Uniswap as you might know is a broker where you can buy say 1000 eth at a fixed price.

While IDEX is a traditional exchange that ranks first for the number of traders, that presumably being measured by how many different addresses are used.

Kyber is a broker as well, but Uniswap is handling far more volumes because it has a far bigger collection of assets in as far as anyone can ‘list’ their token on the dapp.

Therefore it might have fewer traders but those traders make more trades, giving it far bigger volumes.

All of these dapps however don’t seem to have many users in part because there’s just no space to accommodate many more traders without fees rising far higher.

All of these dapps therefore need to get some second layer solution or contract level scaling as we call it, to boost their own capacity by 1000x or more.

Something they’re working on but there probably needs to be some defi consortium to have a coordinated and organized contract scaling strategy that potentially begins with MetaMask and other wallet apps or for eth, the weth smart contract can be scaled to keep accounts within it, and then settle.

Meaning it is probably a fairly big task rather than some plug and play thing because all of these dapps depend on each other. And therefore they need some sort of unified strategy while awaiting ethereum 2.0.