Comments Off on Is CNY Crashing Gold? 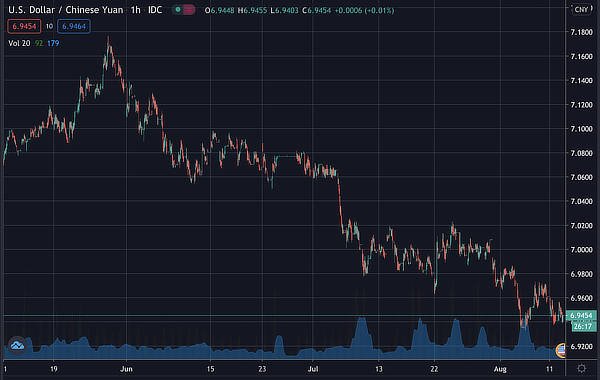 The dollar has been losing significant value against the Chinese Yuan (CNY) for much of this summer.

Since June it has fallen from one dollar buying you 7.2 CNY, to now 6.94, the lowest level since February.

That might be affecting the price of global assets, like gold, which has dropped to $1930 after reaching $2075.

Gold has recently been in a huge bull run with this recent fall potentially being due to its own factors in as far as some might think it has risen enough and/or some might think the economy will improve and thus there will be less need for a safe haven.

However it may also be due to factors outside of gold, specifically foreign exchange fluctuations that feed into the price of global assets somewhat subtly.

As the world’s second biggest economy with a GDP of $14 trillion, CNY strengthening means gold is cheaper as its price is predominantly set in dollars.

Therefore all being equal, China is spending less on gold for the same amount as say America because CNY now buys more dollars, and therefore more gold.

Following speculation in China regarding potentially being cut off from SWIFT in theory, you’d expect the Chinese government itself but also people to have been buying gold as the universal analogue currency.

Now, for the same demand they paying less with their own money, and thus gold’s dollar price fall with this CNY strengthening probably contributing to it at least a bit.

The universal digital gold currency, bitcoin, also saw some price fluctuation, but they’ve banned bitcoin exchanges in China so it isn’t clear how much influence the country has on its price.

Bitcoin as well is mainly traded in USD with arb bots looking at any premium or discount inefficiencies in any currency, leading to generally the CNY price being the same as in USD.

Bitcoin however has different own factors that currently might easily absorb any small fall in demand due to the CNY strengthening.

In addition while gold is mainly bought by governments, primarily China and Russia in the past two years or so, bitcoin is not quite that sort of asset.

The weakening of the dollar therefore can counterbalance the strengthening CNY when it comes to bitcoin because Americans buy it as much as or even more than the Chinese who have to go Over the Counter (OTC).

While for gold, the American government isn’t really buying any to a significant extent and Americans themselves probably buy very small amounts as a hedge, if at all.

Thus there might not be as much counterbalancing here as in bitcoin, with CNY potentially affecting analogue gold significantly more than digital gold.