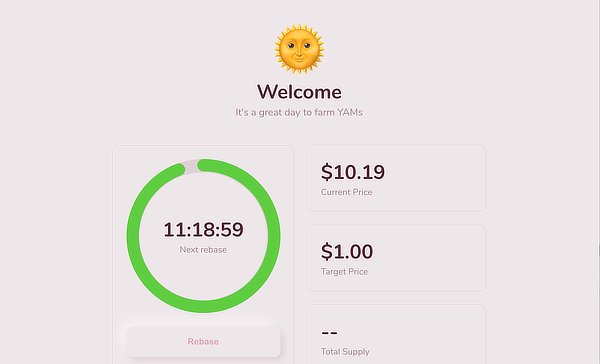 Hours after an Ampleforth like project launched, with the twist being free tokens for liquidity providers to defi projects, a bug has been found in Yam.

“We have found a bug in the rebasing contract… all funds in staking contract are safe, as this is an unrelated part of the protocol. User YAM balances are also unaffected,” the project said.

But, “rebases following the initial rebase will mint more YAM than intended.”

Just hours before, Emin Gun Sirer of Cornell said “this YAM thing has become the biggest talk of the town today. Can’t wait to look through the contract.”

It’s not clear currently whether he had a hand in discovering this bug, with no base assets affected according to Yam which said a token holders vote will now take place to fix the matter.

To understand the rebase, this is a project that tries to smooth the ups and downs of supply and demand by increasing supply if price increases and by contracting it if it decreases, with a twist here in that some of the supply increase goes to the ‘treasury.’

The rebase is the mechanism that manages that part, with this newly launched project finding the attention of some VC media despite it declaring “audits: none.”

That being an attempt to chad meme with people’s money, in a space where we have seen many catastrophes.

Thankfully, this doesn’t appear to be one. More, well negligence we’ll kindly say. For a lot of this was apparently copy pasted with some modifications.

Defi is growing at a near stratospheric pace currently with significant risks of discipline laxation which as the ICOs learned, can bring very unwanted attention.

Memes are fine and good and always welcomed, but all OGs and newcomers do well to remember or learn that promises can be methed in this space and that crypto abides by certain laws of reality.

Which is why we audit, and not only once. And we audit especially if such contracts are by ‘insiders.’

With it in this case seemingly being the Synthetix team, a pretty cool dapp but this Yam gimmick hopefully gets them to slow down and drink some water after maybe too much dancing.