Comments Off on Tether Adds $2 Billion 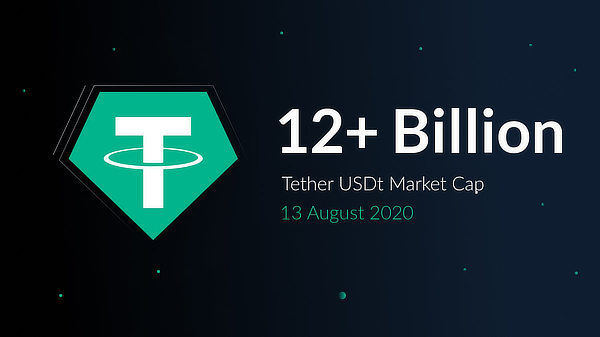 Tether has just announced they have surpassed a $12 billion market capitalization in what is the biggest increase by far since it launched in 2015.

“Since March 2020, Tether’s market cap has increased 140% from $5 billion, maintaining it’s number one spot as the most liquid & trusted stablecoin,” they say.

Just at the end of last month their market cap was $10 billion, but now it has suddenly jumped and bigly:

It looks like $1 billion was added to eth and another $1 billion to tron for a combined additional $2 billion in tokenized dollars.

Tether claims they’re fully backed, but they don’t necessarily keep liabilities in USD. Instead, some of them are in bitcoin and presumably other cryptos.

Coinmarketcap however seems to think tether’s market cap is still $10 billion, with it unclear how they measure it but it might mean they haven’t quite entered market circulation yet, but have been issued to people that wanted them.

There aren’t any stats in regards to who may have wanted them but China uses USDT in their Over the Counter (OTC) crypto markets as it’s the easiest way to get into cryptos.

In addition they’re the dominant trading pair now across the globe, with tether being the fourth biggest ‘crypto’ of them all.