Comments Off on Curve Crashes 50% on Massive Volumes 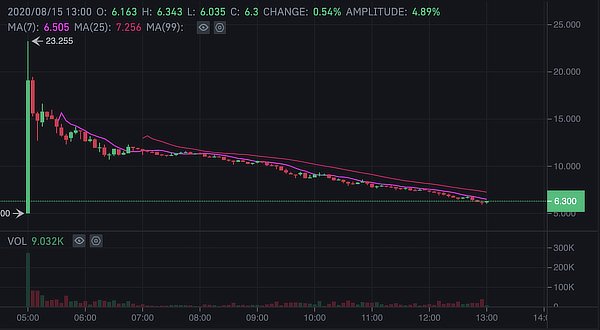 Curve is seeing a wild ride on a tiny market cap but huge volumes of some $56 million just a day after it launched.

The defi token has also began trading on Binance (pictured above) where it opened at about $5, jumped to nearly $25, and now it’s at $6.

Some 1 million a day of CRV is meant to be printed for yield farmers but Coinmarketcap says circulating supply is still just half a million.

Coingeko says it’s about 5.7 million, which is probably the more correct number, and they also say trading volumes are close to $80 million with a market cap of $35 million.

The inflationary rate here is almost total, although constantly dropping to now about 25% a day.

Therefore initial trading of this coin is very sharp as it can move a lot and quite suddenly as new supply comes on.

$50 this reached briefly, giving it a market cap of more than $65 billion based on the initial supply of 1.3 billion that is coming onto market.

Now it has reached around $5, giving it a market cap of $6.5 billion when likewise dapps are at half a billion at best.

So this might be very overvalued, but in the short term there’s the actual circulating supply and demand equation, instead of a pricing in of future supply as well.

Based on the price action of other likewise dapps, it appears the market does correct and somewhat quickly in the first week.

The design here clearly favors those that could get their CRV first with $17 million traded in the first day.

The price action also seems to generally be the opposite of a chain-split coin listing.

In a chainsplit, a ‘good’ one with that naturally being subjective, you want the new split coin at the very moment it launches or in those few hours because ‘haters’ all emotionally just dump without much care.

Thus initially the price is way oversold. Thus you could buy BCH at $50 on the first day, and then if with iron steel hands held, could 100x to $5,000.

Here with these defi tokens however when they use what now seems to be the common distribution design, it looks like you want to sell first and hold out any buying.

In addition the initial chain-split frenzy is ‘sweet’ and tense, while with these defi tokens it seems to be more just downwards after a brief blip in the first day. So when do we get that Dogecoin Classic?