Ethereum 2.0 Testnet Close to Getting Up and Running

Comments Off on Ethereum 2.0 Testnet Close to Getting Up and Running 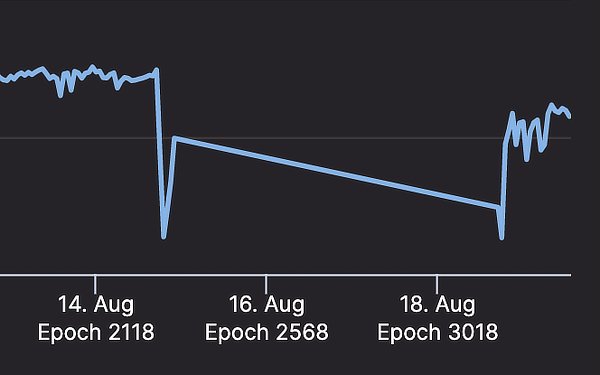 The ethereum 2.0 testnet may get back online later today or tomorrow as the participation rate (pictured) has increased significantly to now near 60%.

Devs are now giving tokens to nudge other validators to get back to syncing as this needs to get to 67%.

After that, it then finalizes and the network starts running as normal, with Raul Jordan of Prysmatic stating:

“We are at around 56% chain participation and need > 66%. If you ran validators before or your node crashed in previous versions, we’re more than happy to help you get back up and running.

You’ll even get a shiny POAP token for helping to revive the testnet. All the help we can get really counts towards this goal.”

The token itself doesn’t have any value, but it can act as a badge of ‘testnet warrior’ with this a fairly big test to see whether it can actually get on.

There have been suggestions a hardfork may be needed instead and in a live environment you probably can’t wait five days and counting for the network to start moving again.

Devs however are waiting for those validators that haven’t gotten back on to be slashed, as well as for those that want to get back on to sync.

Age Manning of Lighthouse said “testnet finalization in 3 hours,” with that being about four hours ago.

So it’s getting close but not quite there yet, with the Prysmatic team recently publishing an account of the events that amounts to: many things went wrong.

It’s a good test run however of the worst case scenario, with plenty learned, but it raises many questions regarding just how well this can sustain an attack.

It also makes it pretty clear that staking can be a very risky business due to no fault of your own, with everything here seemingly working as it should (minus the initial bug), but we all know what bitcoiners will say about the way it seems to work.

There is also no easy defense here really, except insta-forking, because there can be all sorts of unauditable bugs that can bring down the network, like Windows OS somehow affecting it.

Meaning there needs to be a published backup plan that lays out how the network can be brought up within minutes in a likewise scenario, as otherwise no one might want to stake when they can defi.

Also defi projects need to put serious resources towards contract level scaling and other scaling methods on eth 1.0 because they won’t be running on eth 2 for at least a year optimistically speaking, and because naturally eth 2 needs some time after full launch to gain robustness before it can hold all those billions in defi.

This nearly week long downtime is a big step towards that robustness, but now it is probably better to think of eth 1.0 and eth 2.0 with the latter clearly not quite proven yet.