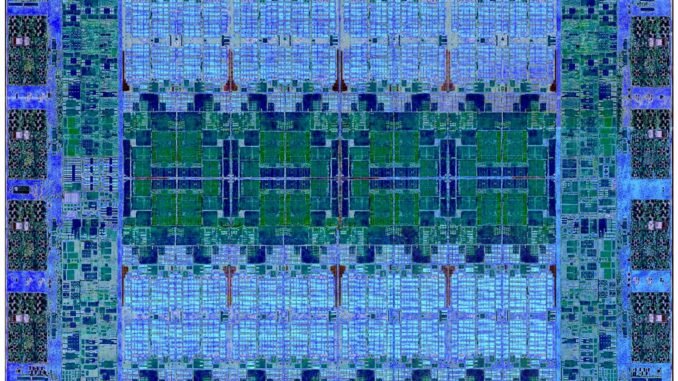 Bitcoin’s hashrate has hit new highs at 124 exahashes a second as technological progress continues increasing the computing capacity of the network.

This is now the world’s biggest supercomputer and is in many ways driving innovation in numerous industries, including renewable energy with hydraulic power a favored choice for miners.

Bitcoin asics are getting faster and faster with this now apparently spilling over to more traditional semiconductors innovation.

A race is on and IBM has just entered it at as the years long leadership of Virginia Rometty, previously the CEO now executive chairwoman, may well start paying off.

“Designed to offer a platform to meet the unique needs of enterprise hybrid cloud computing, the IBM POWER10 processor uses a design focused on energy efficiency and performance in a 7nm form factor with an expected improvement of up to 3x greater processor energy efficiency, workload capacity, and container density than the IBM POWER9 processor,” they say.

In Europe they’re talking of 5nm, but here it’s more for cars which are nowadays becoming full computers as they learn to drive by themselves.

“TSMC and NXP are expanding their collaboration to create a System-on-Chip (SoC) platform in 5nm to deliver the next generation of automotive processors,” Holland’s NXP semiconductors said.

There’s rumors of some even eyeing 3nm, so when Intel announced a delay of six months for its 7nm chips, the market was ruthless, selling off its stock by 20%.

AMD was the gainer, as well as Nvidia and other competitors like TSMC, while the once giant in computing, IBM, of which Steve Jobs in 1984 said “they want it all,” is now at a market cap of just $100 billion.

The company is innovating however, announcing an advancement in quantum computing which is still years away.

They gave some $1.5 billion in dividends to their shareholders and are apparently making some $2 billion in profits a quarter.

Their cloud computing in particular is seeing significant growth at 30%, and they seem to be the only big company playing on Google’s turf of bot systems.

This is a new field and doesn’t have a good name but it focuses on giving bots the ability to incorporate experience.

All knowledge comes from experience some say, and therefore if bots can have experience, they become very useful things.

However as we’ve seen with Google’s Youtube recommendations or even their search rankings which seem to be degrading by the day, bots can’t necessarily tell between good and bad experience.

Yet, our experience of these services may well be a product of higher expectations as nowadays we do expect bots to satisfy us while before we saw them as dum things and were amazed they can even show anything at all.

Advances in that field can have huge benefits, and since these are all ultimately hardware, chip speed is in many ways the basis of the digital revolution which until recently was limited to just information, but is now making its way to industrial production.

As such, to win the digital revolution race with its transformation expected to be total, there needs to be a digital industrial strategy.

Resources need to be poured into it because it can re-energize and transform things as far apart as medicine, environmental management, train speed, space exploration, and even how fresh your tomatoes are in the supermarket.

Therefore, A or B students who now think tech is super cool because they all are watching Musky livestream from his Tesla on a space rocket, should be incentivized at a financial level to study and progress into hard tech fields and soft tech ones as well by for example not requiring any student loans at all.

Those that want to study just finance or business or literature or history are also very valuable to society and the techies would be hugely handicapped without them, but the argument to cover this expensive cost is not as compelling as for hard tech fields.

That’s because in tech, innovation is to be expected and such innovation can have exponential gains for all taxpayers, and therefore there should be even 100% public support for giving these kids all they need and more to do what are very, very difficult things.

Home grown talent further needs a more holistic approach. There should be tech clubs, places where teens can go and see all these things, maybe even the above pictured chip in a hard form, so that they have somewhere to play cool.

We invest in football fields and tennis fields and much else, why not tech fields where maybe even the above quantum computer in a plastic form is shown.

Out of sight, out of mind as they say. So bring it in sight and then we won’t have any delays in these 7nm chips or a big talent shortage in about a decade or two.

That’s because in a decade or two, the future we were promised will probably be here as millennials are doing all they can to ensure it, with flying cars and the whole jazz, or break dancing if you like.

Meaning everything will be tech, from the bots that currently arbitrage in finance, to the trains that may go by themselves from London to Istanbul maybe in just four hours.

And if everything will be tech, then we need a lot of techies, starting with giving kids toy computers, to teens tech fields, to free university for hard sciences.

Because it is about time we invest once more on what has proven time and again to reap exponential rewards.