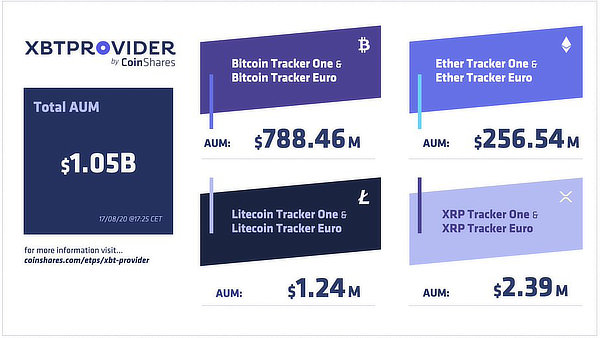 Investment in bitcoin and ethereum Exchange Traded Notes (ETN) on XBT Provider have reached a new high of more than $1 billion.

“We believe Bitcoin has a place in portfolios as an alternative, diversifying asset. And apparently, so does the market,” said XBT’s parent company, CoinShare.

The Nasdaq Stockholm traded shares track the price of bitcoin or eth with the company stating purchased shares are fully backed by crypto.

So making it a way to include bitcoin or ethereum in your traditional investment portfolio with both assets found to be diversifiers that act as a hedge.

For ethereum, a recent study found its inclusion in an investment portfolio increases returns, with the researchers also stating eth acts as a hedge against bitcoin.

“An ever-increasing number of institutional investors are contacting us to discuss how digital assets can fit within a portfolio,” said CoinShares Chief Revenue Officer, Frank Spiteri, who heads up the XBT Provider platform, further adding:

“Traditional banks, brokerages, and asset managers are responding to the needs of their clients, and their clients want bitcoin.”

The bitcoin ETN is attracting some 3x the amount of eth interest, with the latter at around $258 million, while bitcoin is at close to $800 million.

Bitcoin’s market cap however is some five times that of eth, and in addition in June of last year there were some $730 million in this bitcoin ETN, but ‘only’ $180 million in eth.

So proportionally it appears interest in the eth ETN has grown quite a bit faster than in bitcoin, suggesting institutional investors are a bit ahead of the market as eth’s value against bitcoin has grown faster too this year.