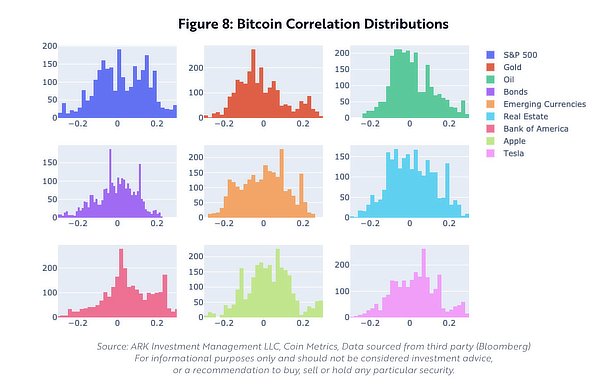 Ark Invest, which focuses on investing in disruptive innovation like AI and biotech, thinks bitcoin could more than 10x in the next five years from the current $200 billion market cap to $3 trillion.

In a comprehensive analysis they suggest bitcoin can capture numerous markets, starting with settlement networks for value exchange. They say:

“In the United States alone, deposits totaling $14.7 trillion generate $1.3 quadrillion in settlement volumes between and among banks each year.

If it were to capture 10% of those settlement volumes at a similar deposit velocity, we believe the Bitcoin network would scale more than 7-fold from roughly $200 billion to $1.5 trillion in value.”

They don’t quite explain why banks would use bitcoin to settle instead of their own Fed systems, but another potential market is asset protection.

“With good public and private key management, we believe bitcoin cannot be seized,” they say. Thus:

“In our view, a sensible allocation to bitcoin would approximate the probability that a corrupt or misguided regime will confiscate assets – whether by fiat money inflation or by outright seizure – during an individual’s lifetime.

If that probability were 5% on average globally, bitcoin’s market capitalization, or network value, could vault more than 10-fold from $200 billion to $2.5 trillion.”

This is further complemented by bitcoin being better than gold in the view of Ark Invest, stating:

“Supporters often refer to bitcoin as digital gold because it improves upon many of physical gold’s characteristics.

Not only is bitcoin scarce and durable, but it also is divisible, verifiable, portable, and transferable, all of which protect from the threat of centralization.

According to our research, if it were to take 10% share of the physical gold market, bitcoin’s network value could increase nearly $1 trillion, 5 times its $200 billion base today.”

This somewhat overlaps with the inflation related potential market, especially in medium to under developed countries:

“While Bitcoin has not evolved enough to service an entire economy, we believe demand for bitcoin in emerging markets should increase as its infrastructure reaches critical mass.

If bitcoin were to capture 5% of the global monetary base outside of the four largest fiat currencies – US dollar, yen, yuan, euro – its market cap could increase by $1 trillion, as shown below, a 6-fold increase from $200 billion today to roughly $1.2 trillion.”

Then we get to the most interesting part of the analysis which is worth reading in full because our highlights can’t do justice to that thorough analysis of bitcoin as a strategic investment.

“Untethered from traditional rules and regulations and, generally uncorrelated to the behavior of other asset classes, bitcoin could serve as a strategic allocation in well-diversified portfolios, despite its volatility.

To illustrate bitcoin’s low correlation relative to other asset classes, we calculated the 90-day rolling correlation between bitcoin and nine other assets over the 10 years from May 2010 through June 2020, [pictured, featured image]. As suggested by this sample, for the most part bitcoin has been uncorrelated to traditional asset classes and various stocks.”

This quality of bitcoin as an uncorrelated asset class has long been established now with this report also concluding “the correlations for each asset tend to center around zero, indicating little to no correlation.”

Including the major fiat currencies, however, bitcoin’s daily trading volume triples to $600 million, the U.S. dollar accounting for roughly half of the total.

Stablecoins more than triple bitcoin’s daily trading volume once again to $1.9 billion, thanks primarily to Tether. Adding cryptocurrencies to the mix increases trading volume by $700 million.

Finally, accounting for nearly 80% of the total, derivatives expand bitcoin’s daily volume more than five-fold to $12.4 billion, giving institutions limited to 10% of the volume an opportunity to deploy $1.2 billion per day.”

Bitcoin trading volumes are however small compared to an entire asset class like equities which handle about half a trillion a day with bitcoin’s trading volumes being more like that of a stock, higher than Google for example but lower than Facebook.

In addition, “bitcoin often is more liquid than the average publicly traded equity,” they say.

Then they analyze what all this means in their view regarding capital allocation in line with the modern portfolio theory.

“With hindsight, to construct a portfolio with bitcoin while maximizing the Sharpe Ratio or minimizing volatility at the efficient frontier, an investor would allocate between 0.27% and 6.55% to bitcoin,” they say. Looking forward:

“According to three 5-year simulations, each a function of bitcoin’s total addressable market (TAM) opportunities,

Based on this analysis, investors seeking to minimize volatility would allocate between 0.03% and 1.28% to bitcoin.

Investors seeking to maximize Sharpe Ratio would allocate between 4.8% and 25.78% to bitcoin.”

A quarter of the portfolio is at the low end for many cryptonians, but for investment managers dealing with billions or even trillions, it sounds like the low end for the braver ones is 5%.

So general advice now perhaps should evolve to allocating between 1% to 5% of investable capital for maximum potential reward while minimizing potential risk.