A Million Traded in a Testnet Reddit Ethereum Token 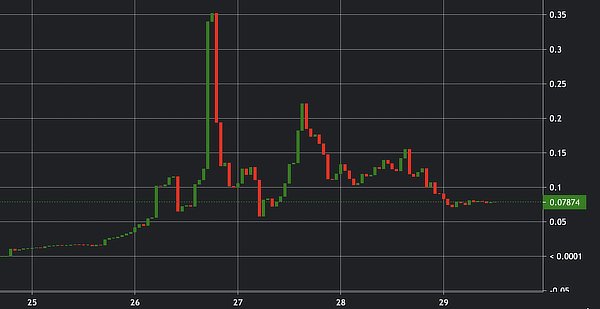 There are few things you can be sure of in crypto, but that a testnet token is worthless is one of them.

Until now. Moon, worthless reddit karma has been turned into an ethereum token but on a testing network which has the primary purpose of being worthless because then if things break during testing, no one cares.

Anyone can mine the Rinkeby testnet, and thus it can very easily be attacked or double spent, but people don’t seem to care.

They’ve decided this entire worthless ecosystem is actually worth 8 cent and that’s after it reached 35 cent on Friday.

Some $250,000 of it was traded in the past 24 hours, while Sunday saw nearly half a million of worthless squared exchanged, making it about a million dollars traded so far.

Moons, a testnet token granted by reddit to r/cryptocurrency users based on contribution with 50 million of them initially distributed in May, did not have a market because it’s testnet.

That’s where you’d think it would have stayed until they launch it on mainnet like Donuts of r/ethtraders which has been Uniswaping for months.

Someone however came up with a way to send dai to xdai, the x bit being a Proof of Authority (PoA) method to bypass scalability and decentralization constrains. Then, you turn moons into xmoons as well, and now you can trade xmoons which are moons.

Why? Well you can convert moons to Reddit Coins which buy emojis next to someone’s nick instead of having only that Reddit Gold status emoji.

On ethtraders they have special membership as well and more importantly you can buy advertising space by paying with donuts for the sub’s banner.

But donuts are on eth proper, not on a testnet that gets connected through a permissioned method to the mainnet.

However, speculation being the name of the game, some are clearly wondering what moons could be, rather than are, presumably also because reddit would convert these testnet moons to mainnet at some point.

So some of the market seems to be saying why wait when you can speculate now, with this token being valued at $3.5 million in total.

Within the current reddit design, that’s presumably not wanted by Conde Nast considering they may well want to take over the top subs and run them themselves while claiming it’s the rule the top mod can do what he/she wants, except when it isn’t the rule as in the case of a few top mods they’ve kicked out.

So without that actual novation, you’re left with gimmicks like you can have a token to buy a coin to buy an emoji. Or you can post gifs now because we’re not all sick enough of seeing them on our Twitter where the replies always do their best to make us lose our focus with them moving things.

But if reddit doesn’t go that full step, then you’d think someone will because no one likes dictatorship with Reddit’s design being the most dictatorial of them all.