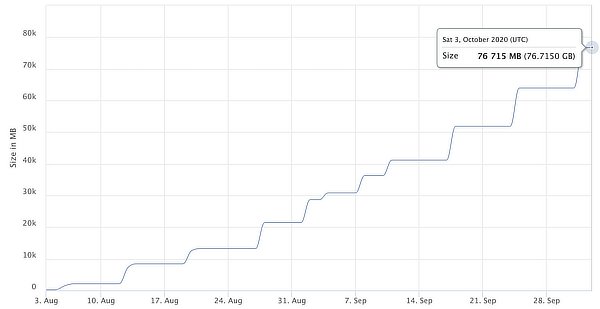 The two months old ethereum 2.0 testnet has already grown to the size of 75GB of data per node.

That’s more than 20% of bitcoin’s data usage in its decade long processing of data and all within just weeks.

Bitcoin has grown to 350 GB since its inception in 2009, while the ethereum 2.0 testnet is now already at 76 GB of data for an archive node.

Ethereum’s blockchain has grown quicker than bitcoin’s at nearly 500 GB of size in just four years.

That’s for the full ethereum node, which is the equivalent of bitcoin’s node in that both contain all history and for eth you can reconstruct the state.

The ethereum 2.0 testnet node however is an archive node, meaning it is keeping the state at every state change.

That’s something not necessary because a full node can reconstruct the state with the data it has.

Yet, currently on ethereum 2.0 there is hardly much data save for the validation of Proof of Work blocks.

It’s not clear therefore why this has grown so quickly, with the growth looking gradual from the 4th of August as pictured above.

At this rate, ethereum 2.0’s archival nodes would be growing at 500GB a year, almost as much as the entire size of current ethereum full nodes.

It’s not clear what the size of a full ethereum 2.0 testnode node is, but you’d expect it to be less by a factor of 4, meaning it’s probably about 18GB.

That being the same size of growth as for current eth, but for the same data ethereum 2.0 promises to provide 64x more scale. However, that is “still years away” according to Vitalik Buterin with ethereum progressing to Proof of Stake first.