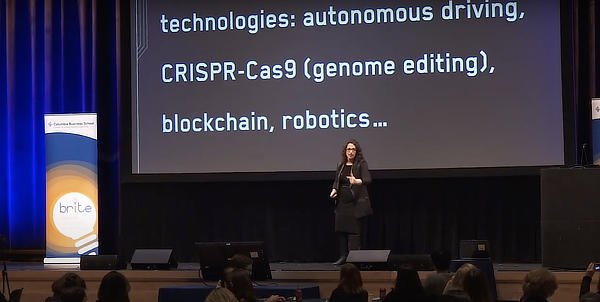 There is a chart that shows nothing happens for millennials, despite the invention of monarchy, democracy, and even the rule of law.

Then suddenly, the flat line has a massive spike. Everything changes and quickly, and it does so because the industrial revolution had arrived.

Some suggest we are on the brink of another one. A tech revolution that combines a number of still very new technologies which effectively amount to creating robotic labour.

Cars are artificial intelligence, someone said, and maybe that’s a good way of understanding what is meant by this misleading label of ai.

Through mechanics a car is made to move under the orders of a human to perform a specific and limited task way better than a human can.

The car doesn’t think, although it kind of does because it “knows” when you press the breaks or when you change the gear.

Much of this is becoming digital, with cars now given the ability to “know” when to change the gears or press the breaks by themselves.

All of this would have not been possible without wifi infrastructure, sensors, and machine learning among other new technologies.

Some claim there are only nine companies in the world playing in artificial intelligence, six American and three Chinese.

While the Chinese ones are dubbed BAT for Baidu, Alibaba and Tencent, although Ant Financial should be there somewhere and some others.

The claim is these nine companies are making decisions on what bots should choose or decide with those bot choices affecting us all because ai will be all pervasive.

The focus here however is far too narrow and the narrative a bit lazy because it zooms in too much on too few companies and on a very specific application of bot management.

The bots here have a very specific task and it amounts to trying to figure out what humans want. In the process, instead of intelligence, these bots are made very dum.

An easy example is say nice fresh fish on Amazon. The bot gives you only a few choices, thinking otherwise you’d be bored. Then, it gives you “also” products, and here it shows nicer things that you might like, but as it often happens, you don’t like any of it.

Clicking through these also products and then surfing around might eventually land you on the fish you wanted.

What happened here is that the bot was hiding from you information, not because it did not have it, but because it thought you don’t want it.

Those that coded the bot did not bother to wonder whether you should be given the choice of being shown the ‘boring’ version. They instead present you the bot, and they give you no autonomy over the bot.

The claim is the bot “learns,” and through this learning the bot is better than you and knows better than you. That’s false in the present, and will likely remain false for decades to come because…

Both are human created games and are created for humans. Both are mathematical games, but they have a very specific aim.

Chess for example teaches you the cost of impulsive action, or how to think somewhat quickly, how to think a bit long term, and most importantly how to control emotions.

A computer can win in a game of chess because it does not care about winning or losing. For a human, losing is painful. Winning is joyful.

It is very easy to get angry in a game of chess, and that’s the point of it. How to not get easily angry.

It’s design therefore is for humans to play. You take out those human qualities, and there is no game. There’s just ‘silly’ maths.

Computers of course are a lot better at maths than humans, but computers are very far from even getting an F- in literature.

This pattern spotting is primarily what these big nine do. They see how many clicked a link, and then the bot ignores what you asked and just presents you patterns, thinking that’s what you want to your great frustration.

This aid could be even desirable, but only if one can control the bot. If one can tell the bot to give the plain results, or to soften the pattern, or to increase it.

This currently is not given as an option, and therefore what was called ai is now seen more as corporate surveillance, or corporate imposition, or even curtailment of autonomy and freedom.

Here, China is advancing as is corporate America, but in an entropic direction.

Communism with Chinese characteristics is just a slogan to many, but it is actually a pretty good description of the current Chinese governance and economic model.

Tunneling we’ll call the guiding of the young from elementary school to university through a process of selection that in the west culminates with a university ranking list.

In China this tunneling continues after graduation to the workplace because the Chinese government tunnels companies too.

It begins with finding a capable person or entrepreneur in a specific field who is given all the support for building a startup with a specific aim.

This person is then connected to the local council or chamber or whatever may be, which coordinates with the universities for the needed talent, and gradually this startup is pushed and supported to become a publicly traded company.

Therefore while ten unicorns in ai related fields in three years might sound surprising to some, it isn’t very surprising when you understand they are created through a planned economy.

That’s what China is, a planned economy with private ownership to some extent where the state guides the young from primary school to retirement throughout university and then the workplace.

As such, things here begin at the top. The Chinese Communist Party (CCP) says we will focus on new tech like ai, blockchain etc, someone drafts a plan of how to achieve it, and then the apparatus goes into action to set up these startups, furnish them with graduates or personnel through talent programs or other ways, and continues to direct it until it becomes a publicly traded company at which point as far as the CCP is concerned they have succeeded.

The question there is what it has always been: is ten unicorns too much, just enough, or too little, especially when considering other needs? Time will give the answer.

In America, the process is somewhat different. We have the tunneling until university, and then the young are left to fend off for themselves.

That’s in theory. In practice the university ranking corresponds generally to their workplace “ranking” with corporations taking the role of the CCP or VCs being the tunneler for startups in a dual system of extreme specialization in global corporations and risky new ventures in VC land.

The state here has no role but what in practice occurs is that corporations effectively become mini-states and gradually practically they become the state through capturing if the populace is not sufficiently alert.

Such corporations therefore have in their interest maintenance of power and longevity, with competition being a threat that is generally removed by incorporation or underpricing. The people, in this corporate dictatorship system as we have, are to be ordered, not to order.

Artificial intelligence here therefore is more interested in what you do, and in how you respond to their orders, and in how they can please you while they maintain the ability to order and give you no such ability.

It can all be described as in effect a slightly decentralized dictatorship where there are numerous giant companies competing through the same model which discards completely labour, thus humans, but has an escape valve through the VC model which can potentially disrupt the corporations.

Meaning there is more pressure to respond to market forces and resource wastage is less tolerated, but the dominance of giant corporations has a constraining effect which in some ways can amount to a planned economy, but by corporations.

The very advanced European economy stands out for lacking any giant tech companies and that may be more a product of their economic system than their level of advancement.

Cambridge Analytica, for example, was not a global brand but is pretty good at bot creation and management.

There are many other companies that are pretty good at what they do, but are not pervasive global brands, are not an octopus with many legs as is usually the case for American companies.

Germany exemplifies this third way the best. The key differentiator here is that there is worker representation, with 1/3rd of the board made up by those working in the company.

Also generally German companies tend to be medium sized and family owned, focusing on one thing rather than a thousand things, and therefore what they do is not easily known to the media which creates these narratives of just nine companies.

Here we can see in some ways the three systems. Notice how Google gives us no control over that “Images” bit for example which we should be able to close.

Germany stands out for obvious reasons and the above picture tells you plenty about their governance and how they view technology.

Unlike the blind belief in America and much of Europe that corporations can only do good and should be allowed to do what they please, Germany thinks the state, and thus the public, can and should have a say in what they do with that 1/3rd representation being a law.

A company like Google could never operate in Germany because it would have been broken up a long time ago under anti-trust laws provided their government was not captured as arguably the American government was.

So Europe is playing, it’s just no one knows it because they don’t gimmickly boast about a a computer beating a Go player, instead they quietly get on with working on 5nm semiconductors and some of them, eyeing even 3nms.

The government here is trying to get a role through the European Union, but it is primarily medium sized companies driving things forward in a more competitive environment which generally drives specialized innovation and efficiency.

The tech race is a race between three systems. All three have their strengths and weaknesses. For China, resource wastage is way too easy, but so is coordination. For America, big corp is big dull, but it drives startup disruption. For Europe, economies of scale are not fully utilized, but it secures a more balanced approach with humans first.

AI is unlikely to have a winner as such, however. It’s more about which approach is better, who can implement it first, and who is able to utilize it to its full extent.

The German model of medium sized companies you’d think would be best placed because actors more directly affected by market forces are the ones making decisions.

The American system can maybe drive it further but at the risk of dead ends. While the Chinese system would be better placed to copyingly implement it because of its coordination advantage.

Meaning we are witnessing a competition between three systems which is visible through this tech race and many other races in frontier fields.