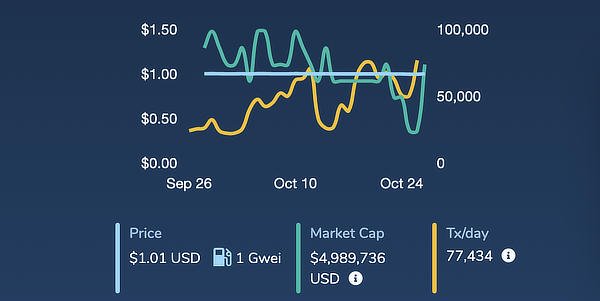 xDai, an ethereum sidechain that significantly increases capacity has been handling some 77,000 transactions in the past 24 hours.

That’s close to 10% of ethereum’s on-chain transactions, with xDai being kind of an extension of eth.

Based on a system of smart contracts, you basically deposit dai, which the sidechain then “reads” and mints you xdai. Once you done, the xdai is burned and your dai is unlocked.

Now, this bridging can be done with any ERC20 token following the launch of OmniBridge which performs the above process, but for all eth based tokens.

The ERC20 tokens and the xERC20s are pegged with this infrastructure being just a transfer of assets from the very secure and decentralized ethereum blockchain, to the xdai Proof of Authority (PoA) blockchain.

These are generally known and respected projects, so you expect them to not misbehave, and thus capacity can be substantial here because it’s a bit like a trusted database operated by the above validators.

The project now plans to open up the validation process through dPoS and a STAKE token which is already being used by these validators and soon will be used by the entire public.

At that point this will become a bit more interesting as it would be connecting the current Proof of Work (PoW) chain to the dPoS one.

That connecting bridge however would remain a weakness as the two chains can’t easily read each other without some centralizing pressure.

Otherwise they’re a bit identical with the same Solidity coding language and Ethereum Virtual Machine (EVM), but xdai is a new chain, so it doesn’t have things like Curve.

You can however copy paste Curve’s smart contracts and deploy them on xdai. That’s what was done for Uniswap, with xdai’s version called HoneySwap.

On the surface, HoneySwap and Uniswap look the same, but they have different things inside. HoneySwap for example has just $5 million in liquidity, but is handling some $500,000 in the past 24 hours.

That might be because on the surface, xdai looks very usable, but it is obviously less decentralized and quite a bit less developed than ethereum itself.

However, it is nonetheless handling a lot of transactions, with fees here being basically nonexistent, while transaction times are just five seconds.