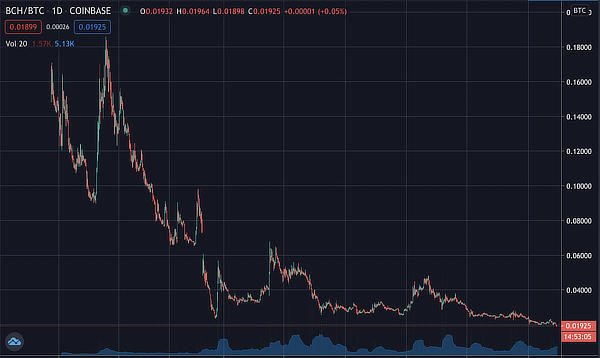 The value of Bitcoin Cash has never been lower against bitcoin, dropping to 0.019 BTC per one BCH.

The first chain-split currency of bitcoin was briefly worth initially as much as 0.5 BTC. But now more than three years on, it is worth less than even eth’s far bigger supply by 0.01 BTC per coin.

That means much has changed in the past three years that has seen this cryptocurrency fall from $5,000 per coin to just $260 and a brief market cap above eth at some $100 billion to now below $5 billion.

What has changed is the project was never able to re-focus after splitting from bitcoin on August 1st 2017.

Instead of at that point gradually shelving off the blocksize debate to focus on what they thought was a better approach and to focus on promoting the usage of BCH as peer to peer cash, they continued re-living what even by then was a very tired debate.

The split of BSV in 2019 was quite damaging to BCH because it created a community split as well with some sections neutral or receptive to BSV.

That made what comparatively was a small community, even smaller, and more importantly seemingly ploughed the seeds for a rift among the different BCH clients.

The toxic atmosphere which pervaded BCH gradually changed from it being directed towards BTC, to it being directed internally, to the point the chief promoter of BCH, Roger Ver, turned against the lead dev of BCH, Amaury Sechet.

Now there’s to be another contentious fork on November 15th which may well result in a chain-split due to differences between the client teams and much animosity.

It’s unclear whether this project will be able to survive another split with it already losing relevance generally because they appear unable to agree on anything.

That is now clearly reflected on its price and its ratio against bitcoin, with BCH seemingly just unable to keep up with the significant competition around it as they turn inwardly against each other.