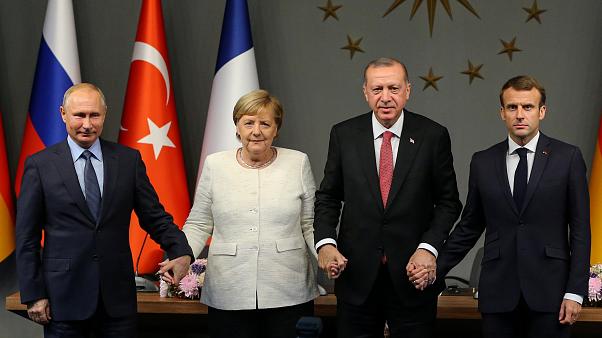 Bitcoin is a hedge against geopolitical risks, a study has found, but it has not immediately responded to an increase in tensions perhaps due to internal crypto factors.

The attack in Vienna however is the latest in an escalation that began with the re-publishing of the cartoons that portray one of the main religious figure for two billion people as a suicide bomber.

A barbaric beheading in France then turned all this political after the French President Emmanuel Macron said Islam was in crisis, courting a backlash across the muslim world with the Turkish president leading the charge after he called certain measures announced by France as a witch hunt.

Tensions between France and Turkey have been increasing for some time, so these developments were worrying, but “just” a continuation that plenty thought would fizzle out.

This attack in Vienna however marks a different sort of escalation because one would have to ask: why on earth would they attack Vienna?

Austria does not appear to have any sort of involvement in the Middle East, so one can’t see any even unjustifiable reason.

The symbolism however is evident to any student of history, as is the danger of turning Franko-Turkish relations into EU-Islam relations.

In addition, the division of Europe between America and Russia for five decades you’d think would have made it clear that the continent has a weakness in it potentially allowing itself to be divided.

In Austria’s case, it’s relations with Russia have gone so far as to raise the question of whether it is Russia’s Trojan Horse.

Russia of course has its own tensions with Turkey, but the biggest country on earth by land mass is run so well that it’s people are poorer than North Macedonians.

Europeans therefore should be mindful of falling into the same Russian trap where the vast majority of resources are used towards destruction at the expense of the impoverishment of their people.

A trap America is just about hoping to get out now after it grayed its skyscrapers, and a trap Europe can easily fall into if it allows real political aims to be justified based on acts by “loony” perpetrators known to the intelligence service which never explains how well known they were/are and when was the last time they had contact or oversight over them or obviously why they didn’t really stop it.

In this case, it is also why Vienna? The devil’s game of geopolitics presumably is the answer, and thus the increase in risks if these tensions continue to escalate rather than begin their de-escalation.

Where bitcoin is concerned another study found that it is a leading indicator of geopolitical risks.

It has been rising recently with it briefly crossing $14,000 as protests raged across the muslim world and now Europe is probably angered, but what it will do now remains to be seen as Germany’s neighbor has a look at what happened here, by who (really), and why Vienna?