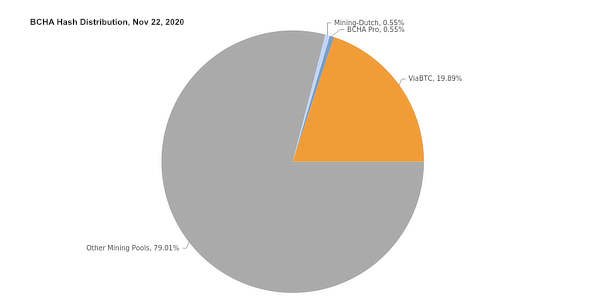 The newest coin to come out of a split in Bitcoin Cash, BCHA, is seeing a denial of service attack of sorts as an unknown miner, which appears to have 80% of the hash, is mining blocks without including any transaction save for the block reward transaction (coinbase).

That means people have to wait a lot longer for a transaction to happen, but that’s all that is happening here so far.

They’re not attempting to double spend their own coins, which they could well do, but in a coinbase message they say “Nov 25th 2020: BCHA dump.”

That means the attacker is most likely someone from BCHN, the new client now coin which managed to kick out the BitcoinABC client, now BCHA coin, over mundane technical disagreements as well as over a disagreement in regards to how to fund development.

BCH miners proposed the idea of development being funded by a portion of block rewards, something BCHA implemented, but BCHN rejected.

So they’re now attacking BCHA which currently has about 10% of BCHN’s hashrate, an amount better than what BCH had when it chain-split from bitcoin in August 2017.

Meaning this miner or miners are effectively wasting their time because other miners have apparently come in, like ViaBTC, which are processing transactions.

However this miner could also be making a point that you need fees to incentivize miners to include transactions as otherwise they could just mine empty blocks.

However as this is a fairly brand new chain, there’s hardly many transactions really, so neither the big blockers nor the small blockers can prove anything here.

BCHN maybe has something to prove in as far as they can claim BCHA is not secure because it has too little hash, but that’s proving their own demise because BCHN hardly has any hash compared to BTC.

The solution moreover is very simple: Keccak them. You change the algo and so for at least a bit we can all CPU mine the BCHA chain, in the process making it far more secure as technically neither BCHA nor BCHN are secure.

That’s because they share the same hash with BTC, which is worth far more and thus has way more hash.

This merge mining leads to hash volatility as miners move between BTC and BCH, now A and N and even SV, with the split argument arising here over how to address that volatility through changing the difficulty algo.

Conceptually you’d think that’s a futile exercise because there are three unknown coin prices, each of which determines how miners allocate their hash.

So the only way to address all this is to change the Proof of Work algo with a solid asics resistance one published on Github by bitcoin core devs ages ago.

That would make BCHA more interesting, not least because it would be secure, with this coin doubling recently instead of dying off as BCHN-ers would like.

It rose from circa $10 to near $20 where it is currently trading, with it possible any big dump makes this coin that more attractive from a speculative perspective.

That’s because it does offer something new in as far as the protocol funds development, removing any conflict of interest in regards to VCs or big donors, or own company interests.

It also happens to have pretty skilled coders with considerable experience relatively speaking, but they have lost the marketing team as Roger Ver backs BCHN because he did not want to be a big donor to BCH during the bear winter, leaving them cash strapped and thus the split.

The funding from block rewards however can give them a sufficient budget to get coding and promoting the coin which has a market and therefore is likely to survive no matter what and potentially even thrive if they smart enough to make themselves the most secure BTC split coin by changing the PoW algo.