Ethereum 2.0 is Now Ready to Go 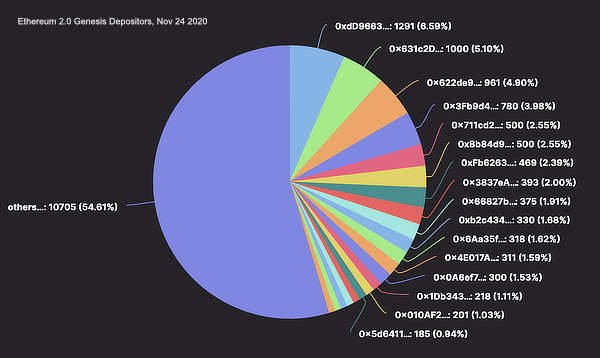 Ethereum 2.0 has met the minimum requirement and has surpassed it, with 630,000 eth deposited as of writing.

That means phase zero of ethereum 2.0 will launch at the earliest time possible on December the first next week.

Some 87,000 eth was deposited by Bitcoin Suisse, which is providing ethereum staking services.

Another 15,000 eth was apparently sent by Cream Finance’s staking service, while stake.fish, which seems to be related to F2Pool, sent 20,000 eth.

All in all, more than 300,000 eth was sent in the past two days, bringing the deposit contract over the finishing line just in time for today, November 24th.

Meaning next week we are to witness the beginning of the new Proof of Stake blockchain which brings in new economics as these deposited eth will be locked for at least two years.

That’s 0.6% of the total supply so far, with it to be seen how it will change as people can’t withdraw until the current blockchain is merged into Proof of Stake.

They can only deposit therefore, and thus the amount that gets locked up can only increase or remain unchanged, it can not decrease for the next two years.

Besides that, little changes except the focus will soon turn to data block storage in phase one and of course towards the merger with it unclear which will come first.