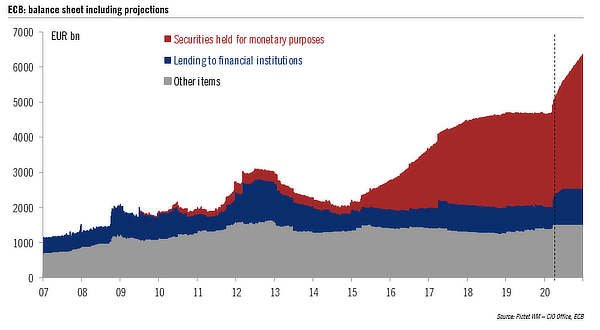 Christine Lagarde, the President of the European Central Bank (ECB), has stated there is no legal basis for the ECB to cancel the government debt it owns.

The trillions that have been borrowed largely from the central bank, therefore, will have to be paid back with interest.

Something that is expected to be a massive burden especially while the economy has contracted significantly, leading to huge reductions in tax intakes.

Meaning that despite the Maastricht Treaty prohibiting the direct financing of government debt by the central bank, this new normal is likely to continue because if bond interest rates rise, then all western governments may well be bankrupt.

The European Central Bank therefore will probably be forced to keep buying government bonds by printing reserves, something that may well lead to losses for ECB. However:

“As the sole issuer of euro-denominated central bank money, the Eurosystem will always be able to generate additional liquidity as needed.

So, by the definition, it will neither go bankrupt nor run out of money. In addition to that, any financial losses, should they occur, would not impair our ability to seek and maintain price stability.”

So said Lagarde, oblivious to academic findings that central bank losses do actually affect their ability to maintain price stability, and can do so totally, as well as do lead to central bank bankruptcy, albeit of a different form than for a company or creditor.

“Banknotes and commercial bank reserves are both a form of money in a modern economy and in fact underpin nearly all other forms of money.

As noted by McLeay, Radia and Thomas (2014a) money is a form of IOU which allows agents to settle transactions.

Ultimately anything can be used as a means of transaction between two agents in an economy if both are willing and able to agree to the transaction.

Money, however, is special as it a means of transaction between agents that does not require them to necessarily trust each other.

Agents should always be willing to accept money, as both a store of value and a unit of account, as long as they trust the issuer of such money.

The central bank’s balance sheet plays a vital role in providing the trust that underpins most forms of money in an economy.”

So says the Bank of England in a decent report over the matter of money where they reveal the amount a commercial bank has in reserves is actually not a constrain for how much they lend, print.

The constrain instead is the cost of funding which is determined by interest rates with the current near zero interest rates or even negative so being not too profitable.

Therefore the government is printing through the central bank, while mainstreet is not getting any such money save for the brief handouts that were given during spring.

Now however that all this has to be paid back, more money is likely to be printed through government bond buying to keep the interest rates low as otherwise the government would have to default to their chief creditor: the central bank.

“A number of studies such as Stella (2010) and Dalton and Dziobek
(2005) have found at least a correlation between central bank losses and poor policy outcomes such as high inflation,” says the report, further adding:

“Reis (2013) argues that a central bank does face a constraint on the extent to which it can expand its liabilities to meet policy objectives as its liabilities can stop being a liquid and trusted method for settlement.

This relates to the need for the central bank to be able to exchange reserves for banknotes on demand.

For the constraint suggested to become binding we would need a situation in which banks attempt to exchange reserves for banknotes, increasing banknotes in the system leads to inflation and ultimately the value of central bank liabilities becoming worthless.

At the extremis agents are no longer willing to hold domestic currency. Ultimately, for this to happen, the general populace will have lost confidence in the central bank.

So far these liabilities have reached €6.8 trillion, an increase of close to €5 trillion in just four years as all constrains go out of the window to the point Lagarde now says the monetary system can’t go bankrupt.

Just in case she is wrong with her famous last words, there is always bitcoin to shield you from the crack-up boom that Lagarde must be smoking.