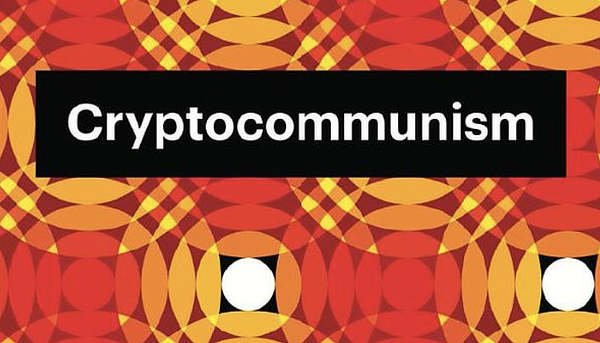 Use the blockchain to “seize the means of monetary production.” That’s the call by philosopher Mark Alizart in a new book called Cryptocommunism.

He argues blockchain provides a basis for building new types of institutions outside of capitalism: collectively owned platforms that facilitate the administrative needs of communities.

And blockchain presents a way out of the democratic deficit seen in both communism and capitalism by allowing communities to construct their own collectively-run monetary institutions that issue currency.

He calls the bitcoin whitepaper a revolutionary manifesto which proclaims that we can trade without bankers, on the par with Martin Luther’s proclamation that we don’t need priests for salvation or Oliver Cornwall’s statement that we don’t need princes for governance. In the brief summary, the author says:

“In so far as they allow us ‘to appropriate collectively the means of monetary production’, to paraphrase Marx, and to replace ‘the government of persons by the administration of things’, as Engels advocated, they form the basis for a political regime that begins to look like a communism which has at last come to fruition – a cryptocommunism.”

The book has been called insightful for its take on a technology that some like to call right wing.

It’s “essentially a communist manifesto for the twenty-first century,” says Red Pepper, a Magazine founded by the socialist movement in the 80s after the defeat of the miners’ strikes.

“The Left needs to take blockchain seriously,” the Magazine says, so adding finesse to a remarkable 2020 where communists now join libertarians to achieve monetary emancipation.

We’ve long argued that there’s plenty for the left on the blockchain, especially where Decentralized Autonomous Organizations (DAOs) are concerned which can be described as collectives or Citizens Assemblies.

A Universal Basic Income would also far more easily be facilitated by blockchain and the removal of rent seeking intermediaries in general would naturally be an appealing proposition for both the left and the right.

In fact the ‘independent’ left and right have way more in common than the ‘organized’ left and right would lead them to believe for they both aim to disempower abuses arising out of power dynamics.

It is about time therefore the ‘left’ officially arrives on the scene as unofficially it has been here since at least 2014.

So showing a remarkable quality as bitcoin has managed to unite christians and muslims, black and white, western and asian, and now even communists and the alt-right.