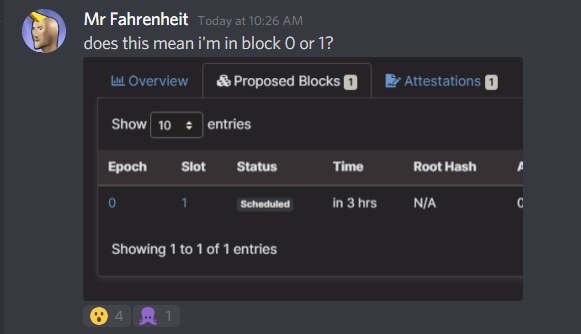 Mr Fahrenheit. That’s the block proposer who far from a normal guy happens to be a dapp developer.

“I got into dapps maybe 2.5 years ago,” he said. “Moved over from Sydney to Hanoi, then just played with ponzi contracts for a living.”

He said “made a bunch of dapps, got a video of Justin Sun playing one of them.”

Then he linked to some stonk project built on tron. So someone joked: first block, ‘buy tron’!

“Like it or not, this is what peak decentralization looks like,” someone said, with Mr Fahrenheit then suggesting he might instead inscribe “Send me 1 ETH get ETH2 back.”

“When do we start planning a re-genesis because we didn’t like the block 1 graffiti?” – Adrian Sutton, an etherean, says.

A joke much of it as he said he is not sure what he is going to put on the block, with people bidding for the right to inscribe genesis eth 2.0.

When someone compared him to being the satoshi of eth2.0, he said: “that’s a bit ridiculous. I didn’t contribute to the development of the protocol at all. I’m more like that annoying guy who pretends to be satoshi.”

So he seems to be a bit cool, and obviously an eth bull, joking “what if I denounce bitcoin and compare it to the typewriter.”

He then suggested “the time of smart contracts has COME. Move over old man.”

Plenty however somewhat wisely suggested no tribalism in the block, with an eth bitcoiner saying:

“Please, no war between us. We are all aiming at the same goal and both project have their pro/cons.”

Yet what Mr Fahrenheit will put in the block remains to be seen as the new ethereum 2.0 blockchain has given him first right to proclaim whatever he wants, including nothing, or what he himself said:

“I moved overseas because I met her. Now I just play games and shitpost all day since I don’t have my ADHD medication so I can’t make dapps.”

Yeh well you can make the genesis block bro from Hanoi together with ‘her’ and inscribe: Long live decentralization!