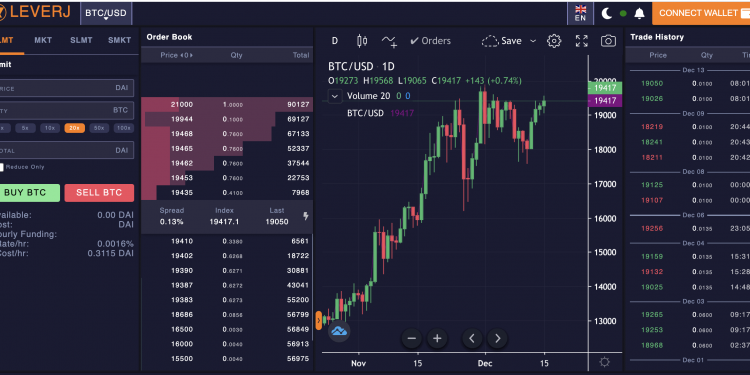 ConsenSys, Coinshares and other crypto companies are backing a non-custodian plasma based decentralized exchange (dex) that has just launched.

Leverj describes itself as a high-speed decentralized derivatives exchange with perpetual swaps for bitcoin and eth in DAI and USDt now live on the dex.

“Both retail and institutional traders are tired of the counterparty risk of centralized exchanges,” Fran Strajnar, CEO of Techemy Capital, said in a statement before adding:

“Uniswap showed the world how instant swaps can work in a simple yet non-custodial way. Leverj.io is the first derivatives exchange to crack the self-custody problem.”

They did so through Gluon Plasma, an adaptation of second layer plasma scaling methods specifically for high-frequency decentralized derivatives trading. Their whitepaper says:

All other features not relating to custodial issues are not considered concerns for the Gluon contract, enabling products that use the plasma sidechain to add features without the need to redeploy a new contract.”

As plasma requires stake to challenge proofs and the like, a token under the ticker of L2 has been launched with it currently having a market cap of close to $11 million based on a circulating supply of 236 million out of about 800 million.

ConsenSys is a large token holder since 2017 and “is exploring further synergy between its portfolio companies,” they say.

Interestingly CoinShares, the manager of some $1.5 billion in stock traded bitcoin and ethereum ETPs, is to provide liquidity and market making services with Meltem Demirors, CoinShares’ Chief Strategy Officer, stating:

“CoinShares has been pioneering liquidity solutions for crypto products since 2013. We are looking forward to bringing our capital markets expertise to the DeFi space by providing liquidity for this new on-chain, high-frequency trading venue.”

They plan to launch a defi index as well with the exchange looking fairly smooth on the surface.

As can be seen pictured above, you have to connect your wallet with it asking you to install MetaMask if it’s not on.

Thereafter you need to give access with the deposit and withdrawal being on-chain transactions, after which you transact on plasma where it looks like no different than a centralized exchange.

Making this a second generation scalable ‘traditional’ exchange, but decentralized and with you holding your coins even while you trade.